Friday 8th.  A light to moderate NNW'ly blew all day, slowly moderating to become light by the end of flying, but accompanied by an overcast that, although allowing flying, restricted launch heights to 1000-1600' QFE.  As a result the longest flight time from the day's 32 ATs was 12 minutes.  However, as the majority of the flights were for corporate day visitors from Chris Booker's company and all those who wanted to had 2 flights,  the day was declared a success, helped along by the  lunch provided by Liz and helpers.

Saturday 9th. The wind had become a light to moderate N'ly, again accompanied by an overcast, although this was higher at the start of the day and broke up by mid afternoon, allowing unlimited launch heights.  14 ATs were flown off runway 20 with landings on both 20 and 02, but the absence of any lift meant launch height was the primary determinant of flight time.  Thus the longest flight of the day came when Paul Whitehead took his Mile High pupil, for a 38 minute flight in the  DG500, this glider also  being the steed for the next longest flight, 28 minutes by Tor Tavener flying it solo off the last flight of the day.    3 other First Flight pupils all had flights  in excess of 20 minutes due to their 3,000' launches, with only Albert Newbery and Geoff Turner joining them with a flight of 27 minutes in K21 KLW from a tow to 2,200'.

Sunday 10th.  A light to moderate SE'ly blew all day, making a change from the persitstent winds with a N'ly component over the last few weeks, and with sunny intervals providing some thermals it was possible to soar, although not without significant effort.  The day's 28 ATs off runway 20 inlcuded 7 for private owners, with 2 of these having flights of over an  hour.  Rob Bailey took his ASG29 to the Tontine, Battersby Junction and Guisborough,  while Bill Payton took Naomi Kennard to the Tontine and then along the north edge of the North Yorkshire Moors to Ingleby Bowl and back, Rob's flight time being 1:32 and Bill/Naomi's 2:10.  No one else exceeded an hour although Colin Troise and Chris Booker came close with 53 minutes in the DG1000, being one of the 6 flights to exceed 30 minutes, the next best in this group being Martin White who had 34 minutes in his Pegase.

Monday 11th.    A day of sunny intervals and isolated showers saw 22 ATs, initially off  runway 24 into a light WNW'ly, the  wind switching into the N mid-afternoon causing a change to operations off runway 20.  The day produced some reasonable local soaring but no cross country flights, apart from John Ellis who took his engine assisted DG800 down to Rufforth and back  in order to get some glider TLC from McLean Aviation.  Apart from John, 5 other pilots had flights of over an hour including David Campbell and J Henderson who had 1:21 in K21 KLW,  Stan and W Panton who had 1:15 in the DG500, Mike Greenacre who had 1:09 in the Astir and Alan Beaumont who had 1:07, also in the Astir.  Another 9 flights exceeded 30 minutes with John Tayler taking his guest H Patterson for 51 minutes in K21 KLW and John Carter and Don Austin also having 51 minutes in the same glider while taking advantage of a convergence over the North Yorks Moors that enabled them to climb to 4,600 asl, the best height of the day.  The following photos of the convergence taken by John are shown below. 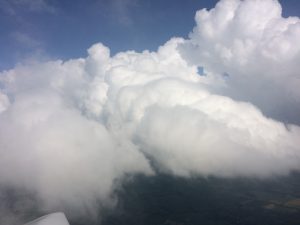 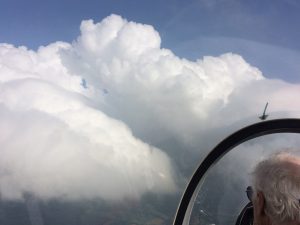 Tuesday 12th  A moderate NNW'ly opened the day but slowly declined in  strength to become light by the end of flying and although cloudy to start with, the skies opened up as the day progressed allowing local soaring as well as some cross country flying.  Of the 9 flights to exceed an hour, Albert Newbery and Bill Payton had by far the longest flight, just over 4 hours, during which they explored the North Yorks Moors in their DG1000T, visiting the Tontine, Carlton and Pickering as well as the A1 west of Topcliffe, covering in total around 135 km.  Lindsay McLane in his Ventus  had 1:50 while visiting Ripon and local soaring, while all the other pilots with flight times of over an hour stayed local to the site.  They included Tony Drury in his DG303 with 1:56, Nigel Burke with 1:31 in his DG600, Roger Burghall in his ASW20 with 1:27,   K McKintyre with 1:14 in the Discus, Tor Tavener with 1:05 in  his ASW20 and Dave McKinney with exactly an hour in his ASW28.  Those having flight times of over 30-59 minutes numbered 11 with Stan and Josie Baker having 55 minutes in the DG500 and John Carter and Peter Brocklebank having 56 minutes in K21 KLW.  Flying continued on into the evening as the Tuesday group took advantage of some pleasant flying weather, no more to than Tim Pearson who re-soloed in K21 KLW, so congratulations to him.  With flying commencing at 1014 hrs and coming to an end at 21:50 hrs it was a full flying day with 49 launches in total.

Wednesday 13th.  A slowly advancing Atlantic depression that was subsequently named Hector, resulted in an uncommon sight this year so far, a light to moderate SW'ly wind which varied between WSW and SSW over the  course of the day.  A sunny start  did not last long as it soon clouded over in the form of high cover but, with the hill working reasonably well, 27 of the day's 34 ATs off runway 24, resulted in flight times of over 30 minutes, with 9 over an hour.  The prospect of soaring led to 10 private owner flights, 5 in the T21, with Lindsay McLane in his Ventus being the only pilot to venture far, covering around 115 km as he visited Disforth and Tockwith.    Lindsay's flight time of 2:23 was only exceeded by K McKintyre in  the Discus with 2:41, with all the other pilots with flight times of greater than an hour being between 1 and 2 hrs, with Reg Rowlinson having 1:40 in the Ka8, Dave McKinney having 1:40 in his ASW28, Nick Gaunt having 1:30 in his LS7 and Stan and Josie Baker having 1:22 in the DG500.  Most of those flying the T21 had between 30 minutes and an hour with Les Rayment and Toby Wilson topping this particular tree with 54 minutes.

Thursday 14th.  Storm Hector resulted in an overnight gust of around 50 kts but with its associated fronts soon to the east of the site and the wind moderating to become an moderate to fresh WSW'ly, winching got underway mid-afternoon as Bill Payton and Stan took Bill's DG1000T for a trip along the west and north edges of the North Yorks Moors to Guisborough West and back.  The trip was predominately in strong thermal, with cloud base rising to around 5,000' asl and the flight lasting 3:11.  An additional 5 launches were flown, with Andy Parish or Ron Beezer flying P1 with Tim Pearson, Sarah Nicole, Will Panton, Hugh Lee and Josie Baker, who all had between 40 and 60 minutes of exhilarating flying.

Friday 15th.   With storm Hector well to the NE, the wind intitially was a moderate SW'ly but later became light to moderate, varying between WSW and SW.   Due to the  change in conditions, the first 13 launches were off the winch, with the remaining 17 via AT, all flights off runway 24.  High cover persisted all day but wave activity was evident in both the underlying clouds and varying hill lift and 3 pilots managed to contact the wave and make significant climbs.  George Rowden in his LS8-18 found a hot spot over Gormire and climbed intially to 3,500' asl before taking advantage of  forming cloud downwind of the ridge which resulted in a climb to 7,500'.  This climb was broken off as the wave gap closed but a full brake descent to below cloud and progress forward to clearer skies over Topcliffe resulted in a climb to just over 9,000' , this being the base of the high cover.  With no sun and an outside temperature of -5C, a chilled pilot landed back at site after 2:10.  Martyn Johnson in his DG600 also made his way to the clearer skies west of Thirsk and attempted to climb through the high cover, but after climbing to 11,000' did not notice any difference in the appearance of the sun so broke off the climb and returned to site after just over 3 hours, making use of his height to do an O/R to Wetherby.  Jesper Mjels, in his DG400, also contacted the wave and flew west, reaching the M6 and climbing to 11,000', before returning to site after a flight of 5 hours. In all, 7 pilots exceeded an hour and a further 10 30 minutes but the transition into the wave proved to be tricky with no one else getting above 3-4,000' asl.  The conditions encouraged 7 private oweners to fly, with 4 pilots having around 2 hrs or more, principally Tim Parsey who had 3:51 in the Ka8, Duncan Pask with 2:50 in his LS10, Jim Mclean having 1:58 in his ASW24 and most importantly, Chris Booker with 5:06 in the DG303, the last hour being at around 600' QFE on the hill.  So congratulations to Chris on achieving his Silver  duration.  Among those flying for just less than an hour were Robin Hutchinson with 50 minutes in the Discus, Andy Parish and Josie Baker with the same time in K21 KLW, Andy Parish and John Dore with 47 minutes in the DG1000 and Paul Whitehead and Hugh Lee with 44 minutes in the DG1000.