Tuesday 22nd.  A low overcast in a variable and gusty, NNW'ly wind initially kept the gliders in the hangars, but by early afternoon the cloud had broken up sufficiently both to allow flying to commence off runway 02 but also to indicate the presence of wave.  John Carter and Phil Turner demonstrated the soarability of the day by having 1:06 in K21 KLW off the first flight  with most of the following 10 ATs in either KLW or the DG500 taking advantage of the wave to post 6 flights of over 40 minutes, with day course member Chris Burket having an hour in KLW with John Carter.   Most of the soaring was done in wave just downwind of southern escarpment of the North Yorks Moors along a line from Kilburn, through Coxwold to Gilling East, but there was also a line of lift upwind of the site running through Cold Kirby to the east of  Helmsley. The afternoon flying continued into the evening with the Tuesday evening group continuing the flying until a combination of increasing wind speeds and encroaching cloud meant  the cessation of flying for the day.  The wave did not extend very high, with most of the soaring flights getting to between 3,300' to 4,700' asl and the following photos by John Carter provide a good flavour of the day. 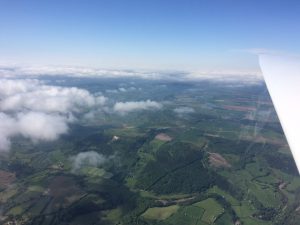 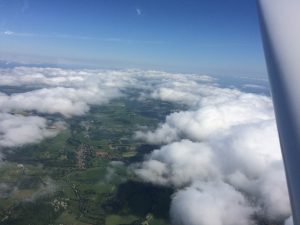 Wednesday 23rd.  Cloud had spread in from the North Sea overnight but its base wase high enough to allow flying to get underway just before 1100 hrs as the first AT of the 23 flown on the day took off from runway 02 into a light N'ly breeze.  The cloud soon started to break up to eventually give blue skies, but with sufficient thermal activity to allow soaring flight and although there were 9 private owner launches, nobody went very far.  The visitors from the Stratford GC, featured well on the endurance list, particularly the Kerbys, with Sharon having 2:00 in  her ASW 28 and Barry having the longest flight of the day, 3:44 in his Duo Discus, P Challens being his P2.  D and S Brown had 1:57 in the DG1000, N Croyford had 1:50 in his LS4, Andy Bulkwill had 1:32 in his LS8-18 and J Gale had 1:06.  Bob Beck replied for YGC pilots with 3:17 in his Ventus. In addition to the above soaring flights, there were 10 flights of over 30 minutes, with Stan taking one of the 6 First Flight pupils of the day, I Smith, for 47 minutes off a Mile High flight in the DG500, while Andy Parish and Geoff Turner had 46 minutes in K21 KLW.

Thursday 24th.  Thursday was a repeat of Wednesday in terms of initial cloud cover that broke up to give blue skies, but with the cloud cover breaking up somewhat sooner.  The presence of thermal activity encouraged 11 private owner launches, initially off runway 20 as the wind was light and variable.  However, with   the wind increasing in strength to become a light to moderate NE'ly, operations were switched to runway 02 in the early afternoon.  The thermal conditions were such at to produce 3 flights of over an hour with a further 8 over 30 minutes out of a launch total of 27 ATs, but nobody went very far, Peter Clay's visit to the Tontine in his Ventus being the most adventurous.  Peter's flight of 1:05 was matched by the 1:06 of Barry Kerby and Barry Monslow in their Duo Discus and the 1:04 of Duncan Pask in his LS10, while the best of the rest saw Andy Bulkwill have 52 minutes in his LS8-18, John Ellis have 49 minutes in his DG800 and A Flower have 35 minutes in his LS4.  Stan was kept busy flying 5 of the day's 7 First Flight pupils, including a Mile High aspirant, assisted by Bob Beck and Albert Newbery.  The day was far from being straightforward as demonstrated by Nick Gaunt coming off tow at 1400' QFE in his LS7 but then finding that the thermal he had launched into was far from ideal with the result being a landing after 11 minutes.

Friday 25th.  A northward travelling feature brought a day of rain and low cloud to the site, with the result being a non-flying day although the simulator came into its own.