Saturday 5th.  Flying got underway just before 1000 hrs off runway 20 as light to moderate S'ly blew, this slowly veering into  the WSW as the day progressed.  With the anticyclone still in control of the weather, it was hot and sunny by Sutton Bank standards and it took a while for convection to get going, and this, coupled with low base, shallow Cumulus, meant soaring was something of a hot and tricky task.  Nevertheless, 9 flights exceeded an hour although no 0ne strayed far from the site.  Conditions improved as the day progressed with the cloud base rising and maximum altitudes of around 4,400' asl being reached.  Darren Lodge in his LS 8-18 showed the way, taking off just after 1100 hrs and landing some 2:19 later.  Others to exceed an hour included Graham Taylor in the DG303 with 1:40,Tony Drury and Colin Troise who shared 1:20 in the DG1000, while the following pilots all had around an hour: Albert Newbery/Chris Haresnape in K21 KLW, Andy Parish/Martin Joyce in the DG500, Kelly Teagle in her Mosquito,  Mike Smith in the DG303, Tim Stanley in his ASW 19 with Chris Haresnape making up the list by flying KLW solo for 1:05.  The day was also busy with 7 First Flight pupils and 5 Falke sorties.  The desire for some better soaring conditions had some pilots providing their own incandations, as the followng photo shows, although it has been suggested that the answer being sought was more to do with whether it was a boy or a girl. 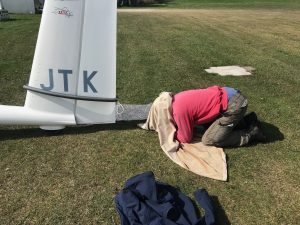 Sunday 6th.   The anticylone  continued to feed  a light to moderate but  increasingly warm air stream to the UK from an generally ESE'ly direction, the maximum temperature reaching 21.3C.  Thermal conditions were somewhat better than on Saturday, but the sparse and shallow Cumulus did not encourage too many cross countries, most of the soaring flights remaining relatively local to the site.  Those to venture a little further were Nick Gaunt in his LS7 who visited the Tontine, Carlton and Helmsley and Peter Clay in his Ventus who went to Ripon and Helmsley, while Northallerton was the destination of Martyn Johnson in his DG600.  Two pilots had flights of over 3 hours, Nick and Darren |Lodge in  his LS8-18, while Martyn had 2:17 and a further 7 flights had between 1-2 hours.  The latter included Roger Burghall with 1:51 in his ASW 21, N Morgan with 1:46 in the Discus, Fred Brown with 1;43 in his Ventus and Simona Latimer with 1:36 in her Discus. The day saw 42 launches the  launch point being busy with 7 First Flights, 15 private owner launches, including the T21, and numerous two seater flights, but of the latter only Dick Cole and Adam Sayer managed to break the 1 hour flight time with 1:05 in the DG500.

Monday 7th.  Monday proved to be the last day of the early May heat wave, the maximum temperature reaching 23.3C as a light to moderate generally SE'ly blew, with consequent operations off runway 20.  Subtle differences in the atmospheric conditions meant a day of tricky soaring, with only 8 of the day's 40 launches exceeding 30 minutes and of these only 3 of over an hour.  Rob Bailey in his ASG29 had by far the longest flight, 2:39, during which he visited Ripon and Pately Bridge, where he enjoyed himself dealing with rough thermals in the, ultimately false hope, that they would elevate him into wave.  Everybody else stayed local, with Phil Turner, solo in K21 KLW and Duncan Pask in his LS10 the only other pilots to exceed an hour, both with 1:02.  Two of the day's 8 First Flight pupils were in the > 30 minute list,  M Brock, courtersy of a Mile High flight with Tony Drury in the DG500, and L Colleth, this time with Kelly Teagle, again in the DG500 while M Howie and A McDermott had 34 minutes in the DG1000 and John Marsh and A Sayer had 36 minutes in the same glider.

Tuesday 8th.  A weakening Atlantic cold front made slow progress eastwards during the day, the morning being sunny and blue with the temperature reaching 20.1 C before the front arrived, the transition to a much cooler air mass being noticeable.  This change was accompanied by a marked veer in wind direction, the initially light SE'ly being replaced by a initially light to  moderate W'ly that later declined to light, the front bringing a little rain in the early evening.   The day saw 26 launches, mostly off runway 20 but the Tuesday evening flyers operated off 24.  Most of the day was blue so soaring conditions were somewhat tricky with only 2 flights exceeding an hour with one of those, Mike Howey in his ASW 20, landing out.  Rob Bailey on the other hand visited Helmsley and approached Castle Howard before retreating to site with a flight time of 1:23 in his ASG29.  Mike Greenacre in the Ka8 almost joined the > 1 hour list with 59 minutes with Stan and Andy Rigby having 41 minutes in the DG1000, later having 46 minutes in the same glider, the same time being posted by Andy Parish and Martin Selby in K21 KLW.   The Tuesday evening group were intially prevented from flying by the  onset of rain around 1800 hrs and after putting the gliders and equipment away retired to the briefing room for some lectures.  However, the rain was quickly over and with wave clouds in evidence, the DG500 and K21 were quickly taken to the launch point where Graham Evison with Richard Acroyd in the DG500 and Steve Thompson and Adam Sayer in KLW enjoyed 40 minutes of wave soaring  to 5,000' asl before fading light meant an end of flying for the day.