Saturday 12th.  A light NNW'ly and bright conditions opened the flying day but it became progressively cloudier as the day progressed and rain arrived around 2000 hrs.  It was a busy flying day, with 33 ATs off runway 20 as the wind soon backed into the S, but soaring opportunities were limited as evidenced by the fact that only 1 flight exceeded an hour with 8 others exceeding 30 minutes.  The > an hour flight was acheived by Albert Newbery and H Whitehead, who had 1:02 in the DG1000, while the > 30 minute pilots included Chris Booker in the Ka8 with 50 minutes, Steve Thompson and A Harper in the DG500 with 47 minutes, 42 minutes by Charles Willoughby in the Astir and 40 minutes by Tom Dale and Mark Newburn in the DG500.  The motor glider pilots were also busy as the Falke contributed 6 flights to overall total of the day.

Sunday 13th.  An Atlantic front passed through overnight, depositing 8.4 mm of rain, and left a legacy of cloud but this gradually broke up to give sunny intervals and then clear blue skies as high pressure edged in.  A light to moderate W'ly meant ATs off runway 24 with landings on 20 and another busy day was the result, with a group of Scouts and 5 First Flight pupils keeping the 2 seaters busy, while the prospect of soaring meant 5 private owners launched.  Soaring conditions were a little patchy at first but some sort of convergence enabled some serious soaring to be done, with Bill Payton and Andy Hatfield taking Bill's DG1000 on an O/R to Helvellen, a distance of some 270  km with a flying time of 3:17 and a top altitude of around 6,000' asl.  The same convergence enabled Jon Hart to do an O/R to Richmond in his Vega, his flight time being 1:38, while John Marsh visited Ripon and Helmsley in his DG303 and Roger Burghall in his ASW21 had 1:28.  Soaring conditions improved locally as the day progressed, with Nora v G having 1:40 in the Astir from a take off time of 16:37 hrs, Mark Newburn having 1:33 in the DG303 after taking off at 16:38 hrs while John Carter and Peter Robinson, taking off at 1650 hrs, had exactly an hour in  the DG1000, local cloud base by this time having risen to over 5,500' asl.  John Carter's photo from his flight with Peter Robinson gives a good impression of the late afternoon soaring conditions and can you see Mark in the DG303 and Nora in the Astir trying to keep up. 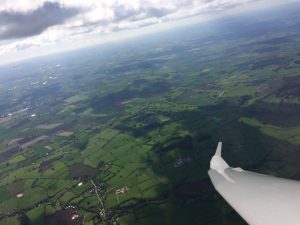 Monday 14th.  The, by now, established anticyclone meant it was a day of light winds, blue skies and warm sunshine but tricky soaring conditions and only 3 of the day's 18 launches exceeded an hour.  Stan and Nick Patrick set the ball rolling with exactly an hour in the DG1000 just after midday, but Rob Bailey and John Ellis used what lift there was to fly cross countries.  Rob took his ASG29 to Ripon and back in a flight of 2:22  while John visited Wetherby, Pontefract and Market Weighton  in his DG800, its engine proving invaluble in getting John back to site to complete a flight of 2:33.   Stan almost made it a double entry into the >1 hour list with 52 minutes in the DG1000 with Tim Leggard, while Toby Wilson had a busy first day as a newly fledged BI as he and Tony Drury flew 6 First Flight pupils.