Friday 27th.  A rainy and non-flying day as a light to moderate ENE'ly brought in copious amounts of low cloud, the temperature failing to reach double figures.

Saturday 28th.  A less than promising forecast meant a low turn out at the launch point, but the early low cloud soon gave way to reasonable flying conditions and 15 ATs were flown off runway 02 into a light to moderate NNW'ly wind.  By the early afternoon there was thermal lift available, albeit with a relatively low cloudbase over the moors, but sufficient for Rob Bailey in his ASG29 to fly an undeclared 141 km with TPs at Carlton/Sutton/Tontine/Sutton/Leyburn and Sutton, his flight time being 3:41.  No one else managed more than an hour, but Mike Collins, with 44 minutes in  the Ka8 and Andy Parish and Adam Sayer with 46 minutes in K21 KLW got closest, these being 2 of the 5 flights to exceed 30 minutes.  The flying list also included 3 First Flight pupils and John Medly, a visitor from the USA.  After flying terminated for the day, club members gathered for the AGM and the presentation of trophies for 2017.

Sunday 29th.  A cold, light to moderate N'ly blew all day, accompanied by a few showers and variable amounts of cloud, but soaring opportunities were hard to come by with only 2  of the day's 8 flights exceeding 30 minutes.  John Carter and Tasha Dodds' 41 minute flight in K21 KLW readily crossed the 30 minute line, while John's other flight, again in KLW, but this time with Mark Newburn, only just made it at 31 minutes.  Two First Flight pupils were introduced to gliding in the company of Tony Drury while Jim Mclean took a brief flight in his ASW24.

Monday 30th. A fresh and cold NNW'ly, gusting into the mid 30kts, kept the hangar doors firmly shut and aspiring pilots indoors to escape the wind chill.  It did, however, mean a busy day on the simulator.

Tuesday 1st May.  A transient ridge of high pressure produced a very welcome soaring day that was gratefully accepted by some of  the club's cross country pilots.  A slowly advancing Atlantic front did not interfere too much during the main soaring period of  the day, although its threat meant that most pilots went for tasks with early finishes.  Paul Whitehead and Linsay McLane, both Ventus pilots, flew the same task, a 169 km rectangle with TPs at Market Weighton, Pontefract and Ripon.  Paul returned directly from Ripon but Lindsay decided to add on a visit to Leyburn.  Bill Payton and Stuart Heaton also visited Leyburn in their DG1000, but had a more northerly task with TPs at the Tontine, Harrogate North and Castle Howard.   George Rowden in his LS8-18 flew the club 100km task, starting and finishing at Sutton W and turning Northallerton, Harrogate North and Sutton on the Forest, before adding on an O/R to the Tontine to cover 135 km, while Tony Drury in  his DG303 visited Rufforth and almost visited Wetherby before a dead looking sky meant a return to Sutton.  An O/R to Rufforth was also John Ellis's task for the day, this limited task being the result of a problem with the engine doors of this DG800 that required a trip to McLean Aviation, the DG agents there, while a reciprocal flight to Sutton from Rufforth was flown by Mr Wakeham in his Vega, the Rufforth Sutton leg being his Silver Distance.  A later AT launched Mr Wakeham for his return to Rufforth.  Nigel Burke flew his DG600 to Sherrif Hutton and Topcliffe, being one of the day's  8 flights of over an hour with a further 10 over 30 minutes.    Lindsay McLane and Bill Payton/Stuart Heaton vied for the top spot with 3:09 and 3:08 respectively, while John Carter and Bob Symonds had 2 flights of over an hour in the DG500 as Bob enjoyed good soaring on the first day of his 3 day course.   Pilots reported some strong climbs and a cloud base that eventually reached around 6,000' asl, as the following photo from John Carter illustrates. 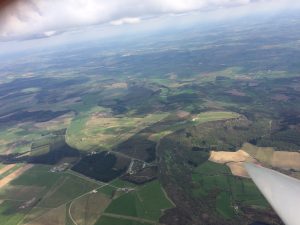 Some weak wave was reported but this mainly seemed to interfere with the thermal activity, producing some confused and rough climbs at times, while the 20+ kt wind at operating height meant slow progress on into wind legs.

Today also saw YGC's summer's instructor Stanislas start his time with us, spending part of the day in the Falke with Andy Parish before having just under an hour soaring the DG500.  The Tuesday evening group took over from the day group, adding  9 launches to the day's total of 32, the first 11 having been off runway 20 before the increasing strength of the SW'ly cross wind led to a change to runway 24 around 1230 hrs.