Tuesday 17th.  A moderate to fresh SE'ly that slowly veered into the S was accompanied by copious amounts of cloud with a base around 1400' QFE.  The wind, gusting to around 30 kts over the middle of the day, prevented any flying until the evening, due to the cross wind on runway 20.  However, the veer into the S meant the Tuesday evening group were able to fly, with 5 ATs being accomplished.  While the cloud-limited tow heights meant flight times were generally low, albeit good for circuit practice, Steve Thompson and Dave Murgatroyd, off the last flight of the day in K21 KLW, demonstrated that the southern ridge was working with a flight time of 37 minutes.

Wednesday 18th.  A moderate, generally SSW'ly blew all day, as warm air arrived from the continent, the maximum temperature reaching 19.4C, making it a pleasant and busy day on site with 30 ATs  flown.  The day was also enlivened by the presence of wave, with a number of pilots contacting, although this was by no means an universal experience. However, the prospect of some wave soaring led to the majority of the club fleet being flown and 6 private owner launches.  9 of the day's flights equalled or exceeded an hour with a further 8 thirty minutes and the day's 5 First Flight pupils had a good introduction to soaring.  John Carter and Alan Beaumont flying the DG500 off the 2nd flight of the day set the wave ball rolling with a climb to 4,900' asl and a number of pilots recorded climbs to over 6,000' asl including John Carter and Mark Newburn in the DG500 who climbed to around 9,000.  Mark later flew the Astir to 7,000' while John also climbed to just over 6,000' with Frank Wilson for company.   Some photos from John and Mark's flight are shown below. 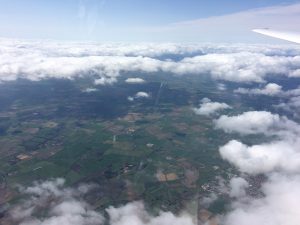 All the above wave climbs were carried out in flights of just over an hour, with Andy Parish and Graham Taylor in the DG1000, who climbed to 4,600' als, Colin Troise in his DG600 and Peter Clay in  his Ventus joining this particular group as did Nick Gaunt's 2 flights  in his LS7.  Nobody went too far from site with Easingwold to the south, Kepwick to the north and Ripon to  the west being the furthest limits of local soaring.

Thursday 18th.  The advection of even warmer air from the continent via a light SSW'ly, under the influence of a large anticyclone to the east of the UK, brought the warmest day so far this year at site, the  temperature reaching 23.2C.  However, the high's strong inversion prevented any convective cloud formation and limited soaring opportunities, consequently, only 5 of the day's 33 ATs off runway 20 exceeded 30 minutes and none exceeded an hour.  The day's 5 private owner flights contributed 2 of the flights to exceed 30 minutes with Duncan Pask staying up for 45 minutes in his LS10 and Paul Whitehead 44 minutes in his Ventus.  The day's Mile High flight not surprisingly made this particular list as Mike Smith and Janet Sanderson had 35 minutes in the DG500, while Albert Newbery and Simon Maddison had the longest flight of the day, 46 minutes in the DG1000.  John Carter later had 38 minutes in the DG500 with Mike O'Neil with Mike later having 37 minutes solo in the same glider.

Friday 20th.  Fresher air from the Atlantic via a light to moderate W'ly flow meant a drop in maximum temperature to 17.6c but, more importantly, the appearance of convective cloud around lunch time after a morning of clear blue skies, perfect for pre-solo training but with zero opportunities for soaring.  The convective cloud was the result of rotor thermals with the associated wave providing very enjoyable soaring conditions in the excellent visibility and warm sun, although contacting the wave became more difficult as the day progressed and the local skies turned increasingly blue.  Steve Thompson and Peter Wright led the way, taking off at 12:33 off runway 20 and then climbing to 6,800' asl in the DG1000, their flight time of 1:06 being the first of 9 to exceed an hour.  Those pilots taking off over the next hour had the best of the wave soaring with Rob Bailey in his ASG 29 and George Rowden in his LS8-18 both reaching around 8,600' asl.  Visitor Chris Gibson, an early arrival from a group of 6 pilots visiting from Lasham over the next week, took his ASG 29 to 7,600' while Martyn Johnson in his DG600 climbed to 6,500'.  All these pilots had flight times between 2 and 3 hours, while pilots having between 1 to 2 hours included Andy Parish and Mike O'Neil in the DG500. John Marsh in his DG303 and Phil Lazenby in the Discus.  Pilots ranged widely over the local area but only Lindsay Mclane extended that with a trip to the seaside via an 1:49 O/R to Scarborough Castle in his Ventus.