Thursday 26th.  A moderate WSW'ly blew all day, initially accompanied by frequent showers that delayed flying until late morning, with, thereafter, 20 winch launches off runway 24.  All the available club 2 seaters were flown plus 3 of the club single seaters, while private owners  were represented by Jon May who flew his Duo Discus with N Hoare as P2.  Flight times varied widely due to showers, with 9 failing to get to 20 minutes, the improving conditions later in the day leading to 4 flights exceeding an hour and a further 6 exceeding thirty minutes, although Derek Smith and Paul Bulmer bucked this particular trend by having 49 minutes in K21 KLW in the early afternoon.  The day's three solo flights all led to durations of over an hour with John Marsh having 1:06 in the DG303, Toby Wilson 1:05 in Astir DPO and Chris Knapp 1:03 in the Discus.  Les Rayment and Conrad Thwaites, however, had the longest flight of the day, 1:34 in the DG1000, during which time they climbed to 2720' QFE, the same height being achieved by John Marsh.  John Carter and Tom Dale in KLW with 53 minutes and Bill Payton and Stuart Heaton sharing 50 minutes in the DG500 topped the > 30 minutes list, while Graham Evison took the only First Flight pupil of the day Mr? Kennedy for 42 minutes in the DG1000.  After flying, and a splendid curry provided by Liz and Co, around 60 pilots, ranging in experience from 53 minutes to over 17,000 hrs and with experience in hang gliders, gliders, single piston engined aircraft, military fast jets/bombers and commercial airliners asembled in the workshop for a GASCo safety presentation given by Nils Jamieson, a glider and commercial pilot.  The excellent presentation, containing some very effective video clips,  majored on situational awareness and threat and error management and concluded by geting the attendees to write down an aspect of their own flying they would seek to improve.  The following photos show half the assembled pilots studying the literature provided by GASCo, the presenter Neil in full flow, and the other half of the assembled pilots filling in a post presentation questionnaire. 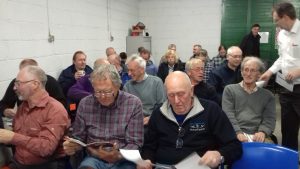 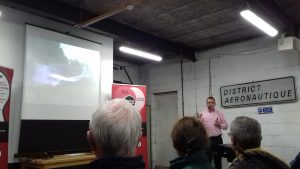 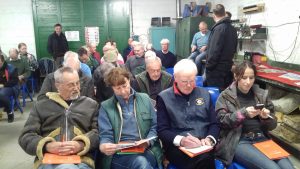