Sunday 1st.  Sunday started with low cloud and showers, the wind being light to moderate from the N.  However, the weather then improved suficiently for flying to commence around 1400 hrs when the first of the day's 5 ATs off runway 02 launched.  The low cloud base restricted launch heights, with some pilots also choosing to release early to concentrate on circuit flying, so flight times were low, with only one of the day's flights getting to 15 minutes, this being by Kelly Teagle who flew K21 KLW solo.  The treasurer's thanks were extended to T Dodds who had the remaining 4 flights in KLW in the company of either John Marsh or John Carter.

Monday 2nd.  A slow moving but active front meant it was a non-flying day, with first snow and then rain falling all day, the accumulated total being around 15 mm. The initially moderate to fresh ENE'ly slowly moderated as it backed into the NE, contributing to a cold day with the maximum temperature only getting to 4.4C.  The lack of any flying did, however, allow John Carter and Jim McLean to sort out some instrumentation problems with the club gliders as the following photo shows. 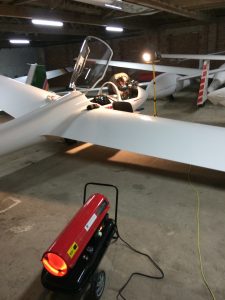 Tuesday 3rd.  April's ignimonious start continued with another non-flying day, low cloud in a moderate SSE'ly preventing flying in the morning and then snow, sleet and eventually rain in the afternoon ruling out any hope of flying as another front crossed the site, its departure leading to the wind veering into the WSW.

Wednesday 4th.  Early rain and low cloud was followed by heavy and frequent showers, leading to another 12 mm of rain falling on an already wet airfield. The initially moderate ESE'ly veered eventually into the NW as a ridge of high pressure approached from the west promising some soaring opportunities on Thursday although the state of the airfield was a discouraging factor.

Thursday 5th.  With the ridge of high pressure over the UK, the day dawned clear, sunny and cold,  the wind being light from the WNW.  With the prospect of some good soaring weather, sufficient dryish areas were found on runway 24 to allow flying to commence around 1050  hrs, the succeeding 7.5 hrs of flying yielding 18 ATs and a Falke flight.  Rob Bailey, flying the Discus, visited Thirsk/Guisborough/Thirsk/Sutton South and Northallerton in his flight of 3:39, covering 135.9 km and having at one point to return to Sutton due to a lack of lift on track.  Bill Payton, flying the DG303, was another pilot to include Northallerton in his itinery as well as venturing to the NE, getting beyond Guisborough and then returning over the moors to Stonegate before landing back at Sutton after a flight of 2:38.  Ron  Beezeer, flying the DG1000 solo, had 1:09 including a trip to that popular spot Northallerton.  Pilots reported good climbs at times with cloud base rising to around 5,000' asl, with Jesper Mjels solo in DG1000 and Nigel Burke in the DG303 taking off in the late afternoon and finding some weak wave that took them above cloudbase to 6-6,500' asl in their flights of 1:28 and 1:22 respectively.  John Carter supplied the following photo which gives a good impression of the thermic conditions.

Duncan Pask and Toby Wilson each had around an hour in the Ka8, while Tony Drury entertained Day Course member Mr Curry, providing him with a 1:03 flight off his third of the day.  Meanwhile, Duncan Pask and Tor Tavener shared 2 flights in the T21 without troubling the log keeper too much.  With 6 flights over an hour and a further 5 over 30 minutes the day provided some much needed soaring opportunities after a very drab start to the year.

Friday 6th.  A frontal system just to the west of the UK meant overcast skies and an initially moderate  ESE'ly wind at site, with operations getting underway around 1050 hrs, Steve Thompson and Ken Duxbury taking the first AT in the DG1000 and finding some episodes of zero in their flight of 21 minutes.  Steve then took Daniel Sommerville, the first of the 4 scheduled First Flight pupils of  the day, for his flight, by which time the wind, which was very cross on runway 20. had increased to become moderate to fresh and was gusting into the mid 20 kts.   Steve and Daniel's flight of 27 minutes proved to be the last real glider flight of the day, as, with the wind continuing to increase in strength and gustiness,  the conditions were considered to be too turbulent and a switch to runway 06 was also ruled out due to the crosswind there and the state of the runway.  The glider, tug and other ground equipment was therefore put away, with virtual flying commencing on the simulator where George Rowden provided the gliding experience for a visiting group who were attending a conference in Ampleforth.