Sunday 15th.  The start of flying was delayed by poor visibility and a low cloud base, the first launch off runway 20 seeing Steve Thompson and A Sayer have 11 minutes of a 1700' AT in K21 KLW.   The next 2 launches, Tony Drury flying KLW solo and Steve and Paul Frost, also in KLW, both resulted in 11 minute flights, launch height again being restricted  as the light to moderate E'ly continued to bring in low cloud.  Finally, Steve and Nora v G had the last flight of the day, landing after 7 minutes at 1337 hrs as the lowering cloud base was accompanied by rain, which lasted for the rest of the day.

Monday 16th.   A less then promising RASP forecast was generally correct. as the initially partially cloudy skies soon clouded over to give 8/8ths at around 4,500' asl, with lower cloud at around 2,700' asl.  The initially  light to moderate S'ly led to the first two launches taking off from runway 20, but a veering wind into the WSW led turbulent conditions on take off and landing so a change to runway 24 resulted, although the wind later backed into the S.  13 ATs were flown behind Pawnee Tango Mike, including 3 for First Flight pupils and one for a Mile High aspirant, with the first 7 ATs averaging 26 minutes flying time.  Toby Wilson in Astir DPO, and visitor Andrew Wilmot in his ASW19 had the two best times of this period, with 32 and 30 minutes respectively. However, from around 1430 hrs the skies began to open up and 4 of the day's 5 remaining flights exceeded an hour, with the exception being George Rowden and his Mile High pupil Ray Halmshaw, who had 57 minutes in K21 KLW including a full airbrake descent from 2,500' QFE.  The pilots to exceed an hour enjoyed some good thermal climbs and a cloud base that eventually reached around 5,400' asl, the list including Conrad Thwaites with 1:56 in the Discus, Chris Knapp with 1:13 in the DG303, Peter Clay with 1:10 in Astir DPO and John Carter and Colin Troise with 1:09 in the DG1000 who indulged in some spin and recovery practice.  The late arrival of some good soaring weather is shown in the following photo from John Carter, enabling the following places to be visited, Easingwold to the south, Hornby to the north and Thorpefield to the west. 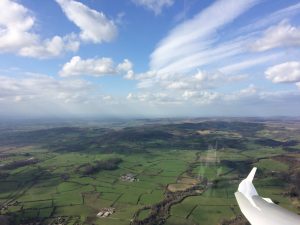