Saturday 7th.  A light to moderate wind, initially from the N but latterly veering into the SE, was accompanied by overcast skies that produced light rain at times, this restricting flying to 4 launches off runway 02,  three of which were for Paul Frost, with the remaining flight being for the day's only First Flight pupil, Richard Hunter.  Graham Evison, Stuart Heaton and John Marsh shared the instructing duties with Stuart and Richard having the longest flight of the day in K21 KLW, 18 minutes.

Sunday 8th.  A generally cloudy day with light winds from the W saw 22 ATs flown, and even a couple of private owner launches, as Roger Burghall and Tor Tavener blew the cobwebs of their ASW20 with flights of 26 and 41 minutes respectively.  Tor's flight was one of 5 to exceed or equal 30 minutes duration, with Toby Wilson celebrating his xx birthday with the longest flight of the day, 55 minutes in the Ka8.   Others to achieve a >30 minute flight time included John Carter and Chris Booker in the DG1000, their 41 minutes no doubt aided by a 4000' tow, John with his guest Will Elborne with 31 minutes in the DG1000, John again, this time with Naomi Kennard managing 30 minutes in K21 KLW and Tony Drury who took David Turner, one of the day's 3 First Flight pupils, for 32 minutes in the DG1000.  In spite of all this flying some members preferred the warmer climes of the simulator.

Monday 9th.  A foggy start to the day in the Vale of York eventually cleared to sunny skies and Cumulus as a light ESE'ly blew.  The start of flying was delayed  to around 1415 hrs  as first the fog lifted into low cloud before dissipating, but with the conditions providing some soaring opportunities from mid afternoon, 3 of the day's flights exceeded an hour and Rob Bailey in his ASG29 flew a 110 km cross country with TP's at the Tontine, Kirbymoorside, Tontine and Helmsley within a flight time of 1:46.  Pilots reported reasonable lift at times and a cloudbase of around 3,000' asl over the moors with a tendency to street.  John Carter and Naomi Kennard flying the DG1000 had 1:19 and Mark Newburn had 1:13 in Astir DPO off  the penultimate launch of the day to complete the list of flights > an hour.  The Newbery's, Albert, Martin and Peter were well represented on the flight logs for both real and virtual flying, while Mike Smith and Naomi Kennard completed their spin checks, the thermic conditions in the afternoon, allowing height to be regained and further spins undertaken.

Tuesday 10th.  Rain overnight and all morning added another 6 mm to the total so far this year as another front tracked northwards over the UK.  Its legacy was low cloud fed in on an initially moderate NE'ly flow, the low cloud blanketing the site and preventing any flying, although those on site were kept busy de-rigging the T21 and making sure it would fit in its trailer.  This activity allowed space in the north hangar to be created allowing Tony Drury to continue with replacement of the lights, the new LED ones certainly being an improvement on the old fluorescent ones.    The Falke was also de-rigged in anticipation of its annual inspection, which is to be carried out by Mike Aherne, while work has started on the refurbishment of the Ladies toilets.  Photos of the results of the de-rigging activity are shown below, courtesy of Tony Drury, who also managed to include the improved lighting in the north hangar in the first shot. 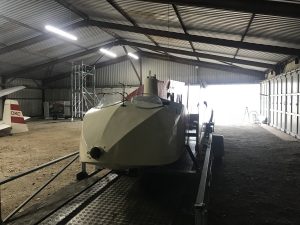 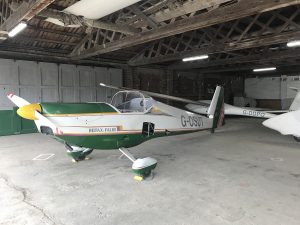 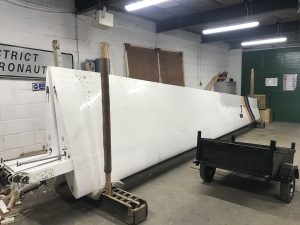 Don't tell anybody, but the Falke's fuselage is to be left as is to check member's DI skills.

Wednesday 11th.  With little change in the synoptic situation the site remained blanketed in cloud as the NE wind continued to bring in low cloud from the North Sea and prevent any flying.  The lack of flying did, however, allow Tony Drury to complete the task of upgrading the lighting in the north hangar.