Friday 13th.  Friday continued the drab and dank weather of the previous few days so there was  no flying.  However, a change of wind direction from onshore to offshore and a brightening of the skies late in the afternoon promised better times ahead.

Saturday 14th.  A light to  moderate SW'ly opened the day, but poor visibility delayed the start of flying until around 1130 hrs when the low cloudbase , around 1200' QFE,  and overcast skies, did not prove to be a problem for John Marsh and Tash Dodds who took 4 successive 1000' ATs behind the Eurofox to hone P2's circuit flying skills.  The cloud base slowly rose during the day and the overcast began to break up mid afternoon, the brightening process allowing some thermal activity to develop that was exploited by the recently re-rigged and privately owned T21, shown here in a launch point photo with its more modern contemporaries, the K21 and DG1000. 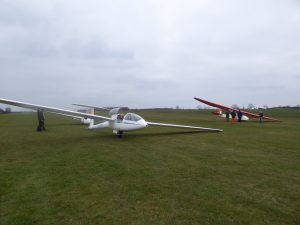 A succession of members took to the skies in the T21, its 5 flights averaging 22 minutes, incidentally equalling the average flight time of the 5 launches done by the K21 and DG1000 over the same period.  The longest flight of the day came in the late afternoon when Chris Booker flew the Ka8 for 44 minutes, other pilots exceeding or equalling 30 minutes of flying time being Joan Wilson and Les Rayment in K21 KLW with 38, and Nick Gaunt and Chris Booker in the T21 with 30.   Although no other private owners flew, the trailer park was busy with rigged gliders, as owners aired their charges and/or carried out fettling work prior to what many are hoping will be a change to some good soaring weather.

The flying day for Tash Dodds ended on a resounding note as she soloed in KLW, the following photos showing the preparation, execution and congratulatory phases of the flight. 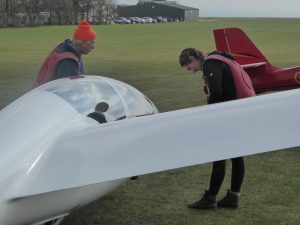 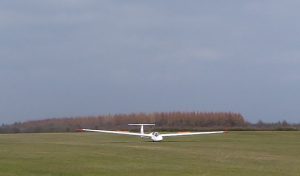 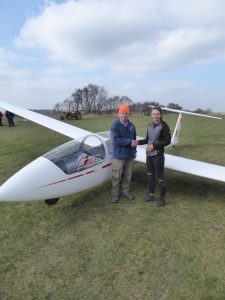 At the end of the flying day, the club's instructors gathered for a meeting where various aspects of flying training and safety were discussed, a briefing on lookout, as practised by the RAF, being provided by Squadron Leader Neil Hildred, Neil and his wife having had their first glider flights during the afternoon with CFI Andy Parish.