Sunday 4th.  A slow, northward moving disturbance brought snow in the morning and rain in the afternoon, so there was no flying, although the thaw contributed to another reason for the hangar doors remaining shut, a very wet airfield.

Monday 5th.  Warmer air brought in on a light to moderate SE'ly wind accelerated the thaw of the lying snow and made the airfield even wetter, although the main reason for not flying was the murky conditions as low cloud swathed the airfield.

Tuesday 6th.  Frontal systems within a slack area of low pressure over the UK led to overnight rain that lasted into the morning, with 10mm accumulated.  The light to moderate wind, initially from the SSE, progressively veered into the WSW as the cloudyskies of the morning gradually opened up, leading to an afternoon with occasional bright and even sunny intervals.  The airfield, however, remained too wet for use, so the only flying was on the simulator.

Wednesday 7th.  A light to moderate SE'ly gradually veered into the W, with the morning's sunny intervals being replaced by a medium level overcast and scattered cloud at around 900' QFE, before brighter skies became the norm mid afternoon.  The airfield had drained well, although very wet patches remained, but operations were possible off runway 20, the launch point being on the western side of the runway.  Flying got underway late morning when Andy Parish took the first of the 3 First Flight pupils of the day, Mr C Beckett, for a 37 minute flight in K21 KLW, weak wave being the reason for the extended flight time.  No one else exceeded this time, with Alan Beaumont getting closest with 30 minutes solo time in KLW, again courtesy of some weak wave.  George Rowden also flew KLW solo while Nora v G had the last flight of the day with Andy Parish, a subsequent solo flight for Nora never materialising due to a failure of an expansion joint in the Eurofox's exhaust.  A photo of operations of runway 20 is shown below. 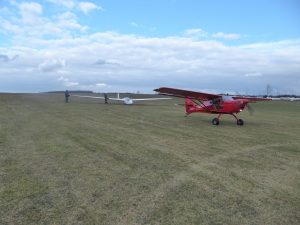