Sunday 11th.  Light wind conditions led to fog in the Vale of York but Sutton was in the clear with flying getting under way just after 1100 hrs when Booker visitors S Economov and R Crockett launched in their club's Duo Discus.  Their return after 16 minutes set the pattern for the day as with no usable lift it was a case of up, round and down from runway 20.  High tows were the means of achieving longer flight times so Tony Drury and his Mile High pupil, Kevin Land, had the longest flight of the day, 32 minutes in the DG500.  A few other flights managed to exceed 20 minutes, predominately as the result of 3,000' tows, these including Tony Drury and First Flight pupil Rod Spink with 24 minutes again in the DG500 and Chris Booker with 22 minutes in  Astir DPO.  22 minutes seemed a reasonably popular time with Mike Smith taking Karen Adams, one of the 6 Scouts to be flown on the day, for this time in the DG1000 and Tony Drury, yet again, taking another First Flight pupil, Sarah Watson for this time again in the DG500.   The day was especially notable for Yvonne Foster, an 86 year old with Motor Neuron disease who fulfilled an ambition with a flight in K21 KLW with John Carter which included some aerobatics.  A photo of a happy looking Yvonne is given below. 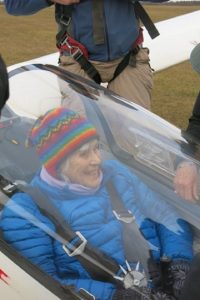 In all the day produced 26 ATs and 4 Falke flights.

Monday 12th.  A slow moving front kept the site in cloud all day and deposited over 16 mm of rain so there was no flying.

Tuesday 13th.  A light to moderate SW'ly blew all day, the wind speed tending to increase with time, while a cloudy morning, with a few isolated showers gradually brightened up to give a sunny late afternoon.  The improving conditions were reflected in the flying, with all four of the flights to equal or exceed 30 minutes flying time coming in the afternoon.  Top of the tree was Phil Lazenby with 42 minutes in Astir DPO, with Graham Evison and Martin Clowes having 34 minutes of the last flight of the day in K21 KLW.  Booker visitors  P Binnee and the Duo Discus pilots J Herman and Nick Hoare all had 30 minutes, while another Booker visitor, Mr Roland, had 31, with a further 7 pilots having between 25 and 29 minutes on a day when 31 ATs were flown off runway 24 and the Falke had 4 flights.

Wednesday 14th.  After a reasonably bright start, the day became increasingly cloudy with the ESE'ly wind backing into the E and  tending to increase from moderate to moderate to fresh. The first of the day's 13 ATs behind either the Eurofox or Pawnee took off from runway 20 around 1045 hrs with some assistance from the southern ridge extending the best of the day's flight times into the 30-40 minute region.  Booker's Duo Discus was the mount for the three longest flights of  the day, with J Hubberstey and P Crockett having 40 minutes, P Binnee and P Crockett having 38 and J Herman and Nick Hoare having 29 minutes. Andy Parish and Tony Kirkby made sure YGC members were mentioned with 28 minutes in K21 KLW.  The day's flying activity was completed by a single Falke sortie.