Friday 23rd.  Friday dawned with a fresh to strong SW'ly blowing with gusts into the mid 30 kt region, there having been some overnight rain.  The cloudy skies gradually brightened and the wind slowly moderated, allowing 2 winch launches to be flown in the afternoon in K21 KLW, the first leading to a flight of 1:11 in which Black Hambleton was visited.  The second winch launch resulted in a flight of 1:07, this time Boltby, the forward ridge and Bagby being overflown.

Saturday 24th.  Some more light rain overnight left a legacy of low cloud but this quickly cleared, leaving the site in a light NW'ly.  Flying got underway around 1100 hrs when Albert Newbery took the first of 4 Scouts for a gliding experience, flying continuing until around 1645 hrs, by which time 11 ATs had been flown.  The conditions were not conducive to soaring, so the longest flight of the day, 52 minutes, resulted from a Mile High flight for pupil A Chapman, Les Rayment being the instructor in K21 KLW.  Tony Drury and Duncan Pask shared the next longest flight, 35 minutes in KLW while the only other flight to get to 20 minutes or more was by Fred Brown who took another of the Scouts for 20 minutes, again in KLW.

Sunday 25th.  A light to moderate WNW'ly blew all day, the cold air mass providing some good soaring conditions, with cloudbase getting to 5,000' asl, although spreadout led to some large dead areas that affected some of those on cross country flights.   The prospect of good soaring conditions after a long and dreary winter encouraged many to fly, the launch total for the day reaching 49, helped by an early start, 0932 hrs and a late finish at 1834 hrs.  The day's flights included 8 of > an hour and a further 20 >30 minutes, while another 4 Scouts and 4 First Flight pupils were introduced to gliding.  Steve Thompson in his Discus set himself a task with TPs at Guisborough West, Fridaythorpe and Rufforth, but spreadout on the way to Rufforth caused abandonment of the task and a tricky return to Sutton, this however being achieved, a distance of 130 km being covered.  Steve's flight of 3:06 was not quite the longest of the day, this being achieved by Darren Lodge in his LS8-18 who soared locally for 3:26, while others achieving flights in excess of an hour included Toby Wilson with 1:30 in the Astir, Colin Troise and Sue Aherne with 1:29 in the DG1000, Andy Hatfield with 1:23 in the Ka8, Mike Smith with 1:19 in the DG303, John Carter and T Kirby with 1:15 in K21 KLW, Roger Burghall with 1:12 in the Discus and John Marsh with 1:08 in the DG303.  The day's flying activity also saw the Eurofox 120 hp demonstrator on site, with the opinion of  those who flew it indicating a towing performance, akin to the Super Cub.  In our own Eurofox, John Carter flew his first solo tow, so congratulations to him.  The day also saw a visit from the Bad Apple Theatre Company researching information on Amy Johnson, a past member of the YGC, for a play they are to perform later this year.  They brought along a very impressive 2/3rds scale Gypsy Moth which will feature in the play, a photo of it being shown below, the first photo also showing a nice soaring skyscape. 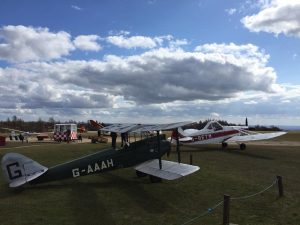 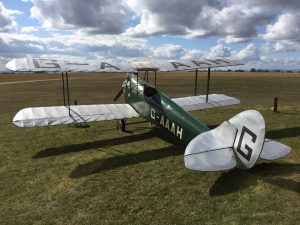 Monday 26th.  Monday was virtually a repeat of Sunday in terms of the weather, blue skies, scattered Cumulus and a light to moderate NW'ly providing another excellent soaring day, with cloud base rising to around 5,600' asl and strong thermals, although some spreadout again made life tricky for those attempting cross country flights.  Lindsay McLean flying his Ventus ventured north to Hexham before crossing the Pennines and getting within a few km of Carlise and then returning to Sutton via Warcop and Barnard Castle to cover some 288 km.  While high cloud bases were the norm to the east of the Pennines, Lindsay reported cloud base  around 3,500' asl to the west of the Pennines.  Steve Thompson in his Dicsus and Phil Lazenby in the DG303 both abandoned their declared tasks, Steve because once aloft he realised the conditions were much better than he had expected, while Phil had a shaky start to his flight.  Nevertheless, Steve flew 199 km around Burn, Market Weighton and Guisborough and Phil, 141 km,  with TPs at Market Weighton and Northallerton.  It wasn't all plain sailing however, as Paul Whitehead found out when, returning from his task, Northallerton, Pocklington, Masham, he ran into a large dead area and took temporary root  in a field planted with carrots near the A1/A61 junction after covering some 150 km in his ASW 24 .  The day saw 5 flights in excess of 2 hours, 11 in excess of an hour and a further 9 greater than 30 minutes, with Lindsay's flight of 4:20 topping the list.  Steve Thompson followed with 3:14, then Phil Lazenby with 3:00, while Mike Collins and Bill Payton both demonstrated the staying up potential of the Ka8 with 2:12 and 2:11 respectively.

Tuesday 27th.  Frontal systems associated with a depression  centred to the SW of the UK brought around 10 mm of rain to the site overnight as the moderate SE'ly wind veered into the WSW and reduced in strength to light over the course of the day.  The remnants of the front brought light rain and low cloud  in the morning, and while conditions slowly improved, they never reached a stage where flying was possible.

Wednesday 28th.   Wednesday brought a light WSW'ly that slowly increased in strength to become moderate, the skies remaining generally cloudy, but with an high enough base to allow the day's Mile High flight to take place.   9 ATs were flown off runway 24, all in either K21 KLW or the DG1000. In the absence of any usable soaring opportunities, the longest flight was that from the Mile High sortie, this being flown in KLW and lasting for 32 minutes.  The only other flight to just reach the 30 minute target was flown in the  DG1000.

Thursday 29th.   A sparkling blue sky and a cold air mass promised a good day's soaring,  but when the Cumulus did start to appear, cloud base was only around 1000' QFE and was slow to rise, the light SE'ly slowly backing into the ESE and strengthening to moderate.  Flying got underway around 1030 hrs and continued until a large, wintry shower of snow grains caused flying to be abandoned for the day at 1615 hrs.  In-between times, 24 ATs were flown off runway 20.  The early conditions led to a number of private owners rigging and flying, but any thought of significant cross countries were soon frustrated as the Cumulus spread out to give a total overcast, although given such a grey and unpromising sky, there were still weak climbs to be had in the afternoon.  Rob Bailey took his ASG 29t to Pocklington and almost back, recourse to the engine having to be made to ensure a safe arrival at Sutton.  Lindsay McLean in his Ventus set off to the north and got past Northallerton before deciding venturing further was not on and returned to Sutton.  Both Rob and Lindsay had over 2 hrs flying, and they were joined in the > 1 hour club by Ben Dawson who had 1:40, George Rowden who had 1:30 in his LS8-18 and Tor Tavener who had 1:12 in the Discus.  Best of the rest were Fred Brown and Steve Ogden who had 47 minutes in K21 KLW, Mike O'Neill with 45 minutes solo in the same glider and Toby Wilson who had 42 minutes in the Astir.  The day also saw 4 First Flight pupils flown and a single Falke flight.