Thursday 8th. There was no flying as a nearby frontal system kept the site in cloud and a little rain for most of the day, the light NW'ly wind slowly backing into the WSW.

Friday 9th.  The back edge of the front provided a covering of snow at site, the snow falling between o900 - 1300 hrs as a light to moderate  NW'ly blew.  Conditions brightened up late in the afternoon, but too late to allow any flying to take place.

Saturday 10th.  Saturday started with low cloud and rain, the rain stopping by late morning and the cloud lifting sufficiently for the hangar doors to be opened to allow  the  Falke to be readied for a flight.  However, a flat tyre put an end to that plan, as did the return of the low cloud and rain.  The club house was, however, busy, this busyness extending into the evening as members gathered for a 2 course meal, provided by Liz and Sarah and served by John Marsh, as a precursor to a lecture on parachutes by Mac, the Safety Officer of the Burn GC.  It was a lecture that confirmed Mac's prediction that those attending would by the end be much more familiar with the treatment and use of parachutes than most of the rest of the UK's glider pilots.  Major points arising from the lecture were a) the answer to the question, does your parachute have drive?  If it doesn't  you should seriously consider having it added  b) how long to delay opening your parachute having exited the aircraft c)  how to steer the parachute b) the importance of landing into wind and avoiding hazards on  the ground c) the effect of wind speed on descent speed and d) how to collapse the parachute once safely landed.

Sunday 11th.  A developing depression crossed the UK overnight bringing a spell of strong winds but these had eased and become WNW'ly by the start of the flying day, allowing flying to start around 1000 hrs and continue, with a short break due to a snow grains shower, until just before 1700 hrs.  By this time 17 winch launches had been flown off runway 24.  The day produced 8 flights of greater than 30 minutes with 3 greater than an hour as all the available 2 seaters and the DG303 and Discus were flown, the average flight time on the day being around 40 minutes.   Wave augmented hill soaring was the order of the day with a number of flights getting to over 3,000' asl with John Carter and Mark Newburn getting to around 4,000' asl before having to do a AH assisted cloud descent as the slot through which they had climbed closed in.  Some photos from their flight, which they obviously enjoyed, are given below. 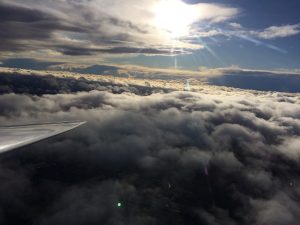 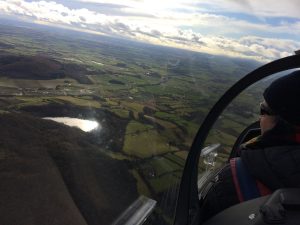 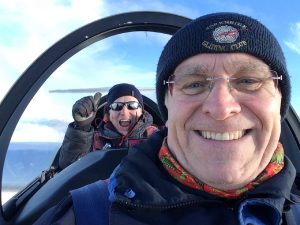 Monday 12th.  A transient ridge of high pressure provided a full day's gliding with a mix of hill, weak wave and even thermal soaring in a moderate W'ly, this progressively backing to become SW'ly by the end of the day.  Flying commenced off runway 24 with ATs behind the Eurofox, Bob Beck taking the first launch and, flying the DG500 solo, posting the first of the 4 flights to exceed an hour, with a further 11 exceeding 30 minutes.  While wave climbs were moderate in amplitude, a number of pilots exceeded 3,000' asl, Dave Campbell taking one of the 5 First flight pupils to over 4,000' asl during a flight of 37 minutes in K21 JVZ.  George Rowden, taking a Mile High pupil in K21 KLW, found wave on release over Helmsley and climbed to 5,800' asl before getting back to site at 1200' QFE only to find the wave aligned with the ridge, the resultant lift taking him and his pupil back to 1600' QFE.  Roger Burghall and Colin Troise flying a mutual in the DG500, climbed to 3700' asl and also had a 500'  thermal climb, a feat Colin was able to repeat when he later flew the Discus.   The early soaring on the ridge led to a change from ATing to winching, but shortly after this change, the hill lift became soft and it was back to ATing, this providing 17 of the day's 21 launches.  A passing snow shower briefly led to a cessation of activity mid afternoon but, post its passing, flights found the wave to be back in harmony with the hill with  the result that flight times exceeded or approached an hour, with  John Marsh and Naomi Kennard climbing to 3,400' asl in K21 KLW  in a flight of 51 minutes off the last flight of the day, spending all of this time aloft  in aerial company with Phil Turner as he flew JVZ solo for an hour.