Thursday 22nd.  The anticyclonic conditions resulted in a cold, light to moderate , SSE'ly flow throughout the day, with flying getting underway from the west side of runway 20 around 1230 hrs.  The intermittent sunshine did result in some usable lift, with the result that 36 minutes was the longest flight of the day, this being achieved by John Ellis and Tony Drury in K21 KLW.  All the day's 6 ATs were flown in KLW, with Geoff Wright flying solo for 27 minutes and Tony Dury taking the only First Flight pupil of the day, Helen Hillman, for a flight of 25 minutes.

Friday 23rd.  With little change in the synoptic situation, the wind continued to blow from the ESE, albeit a little reduced in strength compared to Thursday.  However, the air-stream was considerably cloudier, the low base  of the cloud precluding any flying.

Saturday 24th.   The ESE'ly wind had strengthened to moderate, so operations were again off runway 20, the public footpath side being favoured for take offs.  Flying got under way around midday and was completed around 1330 hrs due to a lack of custom.  5 ATs were flown with all available 2 seaters in use.  The means of staying airborne were noticeable by their absence so the longest flight of  the day, 32 minutes, resulted from the highest tow of the day, Tony Drury taking Philip Baker for a Mile High experience.  Thereafter, more moderate tow heights resulted in flight times in the low 20  minutes, with Andy Parish's 22 minute flight with C Gorserson in the DG1000 and M Morgan and T Kirby's 20 minute flight in K21 KLW being typical examples.

Sunday 25th.  The cloud base was high enough for flying to get underway off runway 20 around 1020 hrs, continuing thereafter until the last landing around 1730 hours.  The moderate initially SE'ly wind soon showed a tendency to back and eventually became E'ly, this requiring a runway change to 06.  All three available 2 seaters were flown with some thermal encountered under streeting cumulus, this allowing John Carter and Mark Newburn to have the longest flight of the day, 45 minutes in the DG500 as Mark continued his BI training.  Later in the day John and Mark took a 5,000' tow to do some spinning exercises in the DG1000, the tow high tow allowing them to post the second longest flight of the day, 29 minutes.  Other pilots to get over 20 minutes included, Richie Toon and David Bradley who had 26 minutes in K21 KLW and Graham Evison and Marian Stanley who had 22 minutes also in KLW.  John Carter had sufficient time during his instructing flights to take a very nice photo of a Brocken Spectre and associated glory which is shown below. 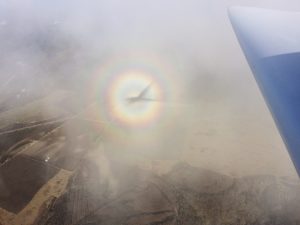 Sunday also saw the Falke have 4 flights, one being an O/R to Kirton in Lindsey via Rufforth.

Monday 26th.  Subtle changes in the position of the anti cyclone meant the wind had now become a light to moderate E'ly, the cloudy skies producing occasional flurries of snow.  As well as the snow flurries, the cloud base was too low to allow any flying to take place, except on the simulator, where Mike Brown demonstrated some flying around Innsbruck using some new software and a  VR headset, the combination producing some outstanding flying simulations in a variety of aircraft from a ASG29 to a Jumbo.  The flying was accompanied by significant noise from the member's lounge and cafe area as new carpeting was installed.