Thursday 1st.  A low in the North Sea provided a cold, moderate and blustery NW'ly flow at Sutton, the wind gusting to over 40 kts.  Consequently, there was no flying.

Friday 2nd.  The blustery NW'ly flow continued into Friday but slowly declined in strength to become light, allowing flying to commence just before 1500 hrs as the skies started to clear.  5 ATs were subsequently flown, all in K21 JVZ, with the last flight landing at 1700 hrs, with one First Flight pupil flown.  The day's flying provided the first thermal climb of the year, as Andy Parish and Tom Wiseman found a 2 kt'er that persisted long enough for them to climb from 1500 to 1850' QFE off the first flight of the day.  Later, Andy, flying this time with Nora v G, found some wave which they used to climb from 3,000' to 4,000', having to leave the lift as the wave slot closed  and then suffering some icing before landing after 30 minutes to record the longest flight of the day.  Tor Tavener flew the only solo flight of the day in KLW before Andy and Tom concluded proceedings with a 15 minute flight.

Saturday 3rd.  A virtually stationary occluded front meant it was a damp, dreary and dull day, the light rain and low cloud ensuring there was no flying.

Sunday 4th.  Saturday's front had moved off leaving the site in a cold and showery N'ly, although most of the showers missed the site allowing 20 ATs to be flown off runway 02, 5 of which were for First Flight pupils who appreciated the excellent visibility.  An absence of any lift meant that it was a circuit day, with even tows to 3,000' QFE only producing flight times into the low 20 minutes, the longest flight time of 22 minutes being achieved by John Carter and Steve Ogden in K21 KLW and Andy Hatfield with First Flight pupil Joan McPherson in K21 JVZ.   Only club 2 seaters were flown but Martin White, Dave Watson, Nora v G and Duncan Pask all took the opportunity to fly solo while the Falke had 3 sorties.

Monday 5th.  A transient ridge of high pressure meant a day of very light winds, but this was a cloudy high, the cloud thick enough to produce some very light snow showers and also low enough to prevent any flying as a light NE/ENE'ly blew.  There was, however, some virtual flying on the simulator.

Tuesday 6th.  A slow moving occluded front meant a day of low cloud, light snow and no flying.  The snowfall lasted from 0600 to 1700 hrs, but only produced a light covering as the wind, initially from the S, progressively veered to become a moderate NW'ly as the front finally cleared.  Although site was not busy, work was progressing at North Yorkshire Sailplanes where the DG1000's re-instrumentation is proceeding as evidenced from the following photo provided by John Carter. 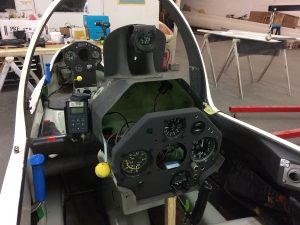 Wednesday 7th.  After the coldest night of the year at site, with the minimum reaching -3.1C, clear blue skies and crisp sunshine were the order of the day until the high cloud in advance of an Atlantic front reached the site mid afternoon.  By  this time 8 ATs, all in K21 KLW,  had been flown off runway 02 in a light NW'ly, this slowly backing into the WSW.  The day's visitors included 3 First Flight pupils and a Mile High aspirant, the latter having the longest flight of the day, 30 minutes, with Graham Evison who was helped out with visitor flying by Dave Campbell and George Rowden.  An absence of lift meant flight times were in in the 14-21 minute range with  Polly Whitehead and Ian Johnston taking advantage of the benign conditions to keep up their currency by flying KLW solo while also enjoying the excellent visibility.  The Falke was also busy with 3 flights, while the crispness of the day was reflected in the frozen nature of the AT rope which Paul Whitehead gallantly, but with some difficulty, coiled up at the end of the flying day.