Sunday 18th.  Fog in the Vale of York slowly dissipated as a light  to moderate SSE'ly blew, this eventually backing into the SE.  Although conditions were suitable for flying if not for soaring, the waterlogged state of the airfield again precluded any flying, so it was again a day of virtual flying in the simulator.

Monday 19th.  An occluded front made slow progress eastwards and then virtually stalled over the eastern side of the UK, this resulting in a dull and wet day, with the site in cloud as the light and initially ESE'ly wind veered progressively to become light NW'ly by the end of daylight hours.  The 6 mm of rain that fell did nothing to improve the state of the airfield.

Tuesday 20th.  Monday's front had disappeared to leave the site in a moderate to fresh NW'ly that slowly veered into the N, with gusts of 25-30 kts.   Initially sunny skies were soon filled with cloud and while the wind direction and strength meant it was a non-flying day, the conditions were certainly helpful in accelerating the drying out of the airfield.

Wednesday 21st.  Extension of the Scandinavian high pressure system southwestwards over the North Sea led to a light to moderate N'ly flow that slowly veered into the NE, sunny intervals being the order of the day.  Flying was confined to 2 Falke flights, the first by Albert Newbery and Mike Smith and the second by Derek Smith and John Shaw, with John continuing his progress towards a cloud flying endorsement.  Pilots reported the base of the scattered cloud at around 2,000' QFE but with poor horizontal visibility, especially up-sun.  The day also saw Ken Arkley return the DG1000 to site after its ARC with its subsequent rigging shown in the following photo. 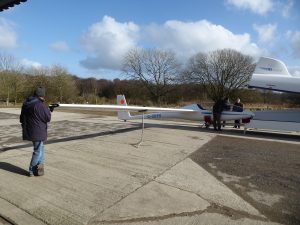 After rigging and a thorough DI, the glider was test flown by Albert and Mike off runway 02 behind Pawnee Tango Mike, their 24 minute flight including some brief thermal climbs and terminating with a spatter free landing on runway 02, confirming the steadily improving state of the airfield.