Thursday 18th.  A light WSW'ly slowly increased to become moderate over the course of the day but in spite of acceptable flying conditions, the state of the airfield ruled out any flying.

Friday 19th.  Another pleasant, if cold, day as a  light to moderate WSW'ly blew but with flying again thwarted by the state of the airfield.

Saturday 20th.  A light SE'ly to start the day  continually veered, eventually finishing up a light to moderate NW'ly as a active front moved eastwards over the south of the UK.  Although rainfall amounts were limited at site, the front provided enough low cloud to prevent any flying.

Sunday 21st.  Another active frontal system brought lowering cloud and eventually snow as the SE'ly flow increased from light to moderate  to become moderate to fresh.  The combination of low cloud and snow, the latter lasting from around 1300 to 1800 hrs, ruled out any prospect of flying.

Monday 22nd.  A strengthening WSW'ly eventually became moderate to fresh as predominately cloudy skies and spits and spots of rain dominated the day and were some of the features preventing flying.  However, the main one was the state of the snow covered airfield as this photo by John Carter demonstrates. 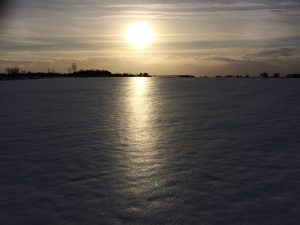 However, with temperatures starting to climb in a flow of mild SW'lies, the disappearance of the snow and the drying out of the airfield should hopefully remove this bar to flying.  The lack of flying did, however, allow Dick Cole to get on with scheduled maintenance on the Eurofox as the next photo shows. 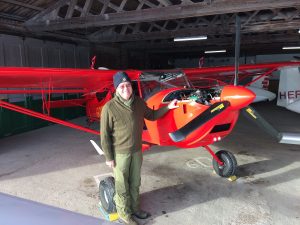