Saturday 13th.  The moderate ESE'ly flow continued to bring in extensive low cloud and even a little rain around midday, so it was again a non-flying day.

Sunday 14th.  The wind speed remained moderate with the direction changing slightly to the SE, but the major flying or not flying factor, cloud base, remained disappointingly too low for any flying to take place.

Monday 15th.  The relatively static synoptic situation of  the lase week became history as an active, Atlantic frontal system swept across the UK, providing 4 mm of rain overnight and into the morning.  However, skies started to clear around midday, with flying getting under way around 1330 hrs as the DG1001 demonstrator was AT'd off runway 24 into a moderate WSW'ly flow, this having initially been a light SW'ly.  Two other ATs in the DG1001 followed with all 3 flights exceeding 30 minutes due to a mixture of  hill lift and weak wave.  PI on all three flights was John Carter, while Colin Troise, Nigel Burke and Alan Beaumont were all complimentary regarding the handling of the DG1001.  For the record John and Colin had 39 minutes of soaring, John and Nigel 36 minutes and John and Alan 30 minutes.  John has provided the following photos which show the start of the clearance, plus a nice illustration of the available hill lift, and some later air to ground shots. 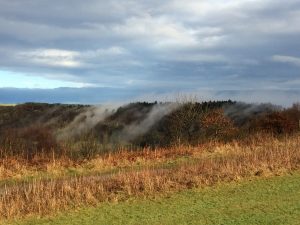 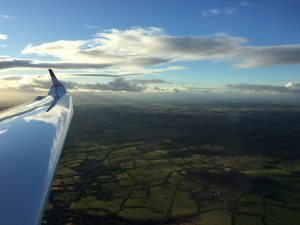 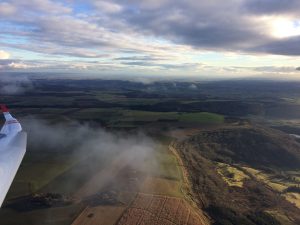 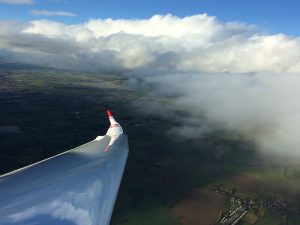 Tuesday 16th.  A deep Atlantic low to the NW of Scotland initially produced a light to moderate WSW'ly flow, encouraging Steve Thompson in his Discus and Albert Newbery and Bill Payton in K21 KLW to AT off runway 24 behind the Eurofox.  However, by the time Albert and Bill took off the wind had become moderate to fresh, the resulting AT persuading Tuggie Andy Parish to call it a day.  Aloft, a combination  of hill lift and weak wave enabled Steve to do 3 O/Rs to the Tontine thus clocking up  the first cross country kms of 2018, 96.6, and climb to around 4,000' asl in his flight of 2 hours, while Albert and Bill had 1:42 during which time they also did an O/R to the Tontine and climbed to 3,500 asl.  Although frequent snow showers were visible over the Pennines, virtually all of them faded away or by-passed the site, although Steve landed as a precaution in anticipation of the arrival of an approaching shower.  Meanwhile, in the workshop, work was ongoing to replace a blown cylinder head gasket on the yellow tractor, the Red tractor having previously being taken off the poorly list following the installation of a new battery.  Other maintenance work has led to new carpeting  in the bunkhouse corridor, while the start of work to refurbish the men's toilet and shower facilities is expected to start in early February.