Monday 1st.  A mild and light to moderate SW'ly that slowly decreased to light,  kept the site in rain for most of the day with accompanying low cloud.  Accordingly, no flying was possible.

Tuesday 2nd.  The wind had become a light to moderate SE'ly, this increasing to moderate to fresh over the middle of the day before declining again while slowly veering into the S.  Low pressure remained in charge as further fronts brought more rain and low cloud from late morning to late afternoon, with the inevitable result, no flying.  However, before the rain came a 0700 hr start saw Tony Drury, Mark Newburn and Tom Dale ready to assist John Carter in a de-rig of K21 JVZ in order to get it to North Yorkshire Sailplanes by 0900 hrs for its ARC.  Tony, Mark and Tom are shown in the following photo (by John) poised for action, or the closest they could get to it at that time in the morning. 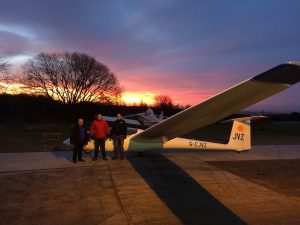 Wednesday 3rd.  Storm Eleanor crossed the north of Scotland overnight bringing moderate to fresh WSW'ly winds to site, these peaking in the early hours with gusts into the mid 40 kts accompanied by more rain.  The winds very slowly eased, but never enough to allow any flying.

Phil Lazenby has been kind enough to send me an email on his latest gliding exploits in Western Australia, not that he wants to gloat, and I have copied them below, with Phil describing his flight on New Year's Eve.

Briefing suggested a good WA day with some CU. The day to start around 11am and still going at 6pm. In the event it didn't get going until about 1pm ( "only" 5000ft until then) but after a blue start Cu formed on leg 1 of our 350km task with bases going up from 9000ft to nearer 11000ft at times. It then turned blue again after the 2nd TP. Climb rates averaged 5-6 knots overall but peaked 7-8 in the stronger ones.
I flew one of the club's Astirs which are fine for these conditions but oh for a LS8 full of water. OLC gave me 355km at 85kph which could have been faster but I was very conservative on the last blue leg as a total fire ban came into force at 6pm which precludes any aircraft movements not on bitumen strips and also vehicular access to paddocks  i.e. land out - stay there for 48 hours! The reason for that is a combination of very hot weather ( 36 C on the ground) and a 2 day break for the fire crews on standby during the NY weekend. And I was on a 3 line whip to get back to Perth in time to see in the New Year.
So a good gliding end to 2017 for me with my 3rd 300+ out here this time and compensation for missing quite a bit of the UK "summer" due to a couple of operations and probably the lousiest season anyone can remember.
Phil also provided the following photo of the Western Australian countryside taken from around 9,000' asl. 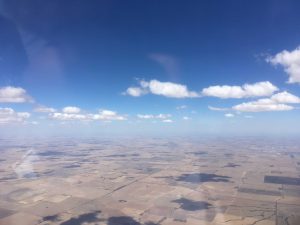