Wednesday 13th.  A cloudy day, the moderate S'ly bringing in periods of rain and low cloud to prevent any  hope of flying, before the responsible front cleared away to the east, the clearance, with  a veer to a moderate W'ly wind, coming too late to allow any flying to take place.

Thursday 14th.  A light to moderate wind that fluctuated between S and SW promised a reasonable flying day, but in the event only a single AT resulted, this being by the Cambridge University GC visitors in their K21.  A Watson and Timo Wilken had 30 minutes aloft with a little bit of help from the ridge, but thereafter, lowering cloud precluded any further flying and eventually led to a spell of rain in mid afternoon, the visitors taking the opportunity to  trailer their glider and depart for home.

Friday 15th.   Another day of low cloud and bits and pieces of rain as a light to moderate NW'ly blew, meant that the hangar doors remained firmly shut.

Saturday 16th.  A rise in pressure as a ridge moved in over the country, brought a day of sunny skies, if somewhat of the hazy variety, and light winds, mainly from the NW quadrant.  The better weather allowed flying to commence around 1015 hrs and continue until around 1530 hrs, by which time 9 ATs had been flown, 5 of which were for First Flight pupils.  With no lift available, it was a case of up, round and down, the up determining when down arrived.  Mike Smith and Tony Drury shared a tow to 4,000' QFE in K21 JVZ, the only glider to be flown on the day, using the height to indulge in some aerobatics and extend their flying time to 28 minutes, the best of the day, Tony supplying the following photographs. The first, while on tow, illustrates the pleasantness of the day, while the second shows a well jowelled  Mike in Top Gun mode. 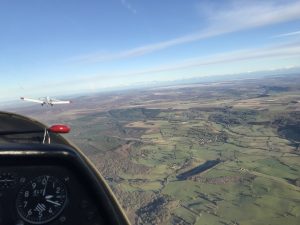 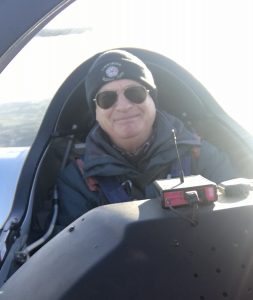 The only other JVZ flights to get over 20 minutes were all by Jon May with 3 of the days First Flight pupils,  while Tom Dale and Mark Newburn had a couple of flights in the Falke.  Although the flying from the site was uneventful, this was not the case for the pilot of a light aircraft flying nearby, who suffered a malfunctioning engine, declared a Pan and landed on site.  The following photo was provided by Graham Taylor and shows the aircraft and pilot with a crowd of on-lookers, probably offering opinions and advice on the cause of the problem and its resolution. 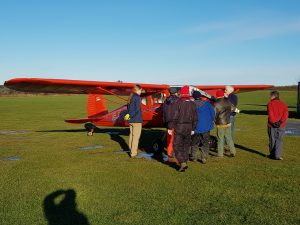 After safely bedding down  JVZ, the tug and other ground equipment, for the night, members spruced themselves up for the club Christmas dinner and raffle, a sense of the occasion being caught in the following photos, taken mainly by Tony Drury with a selection of attendees are shown in  the first couple of photos. 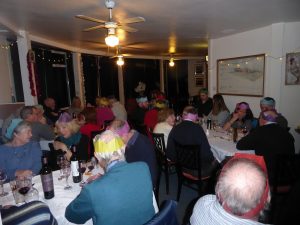 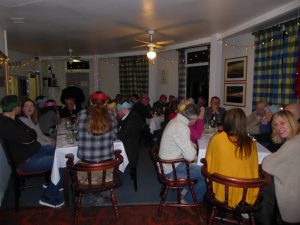 The next photo shows John Marsh, who did a sterling job as waiter, caught on camera just as he responded to a question from a guest about the melon option with the response, "How big do you want them???" 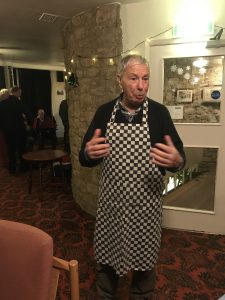 Meanwhile, Mike Brown and Jesper Mjels had to make do with sitting at the naughty table under the watchful eye of Liz and Sarah who provided a splendid 4 course meal that was much appreciated by the assembled multitude. 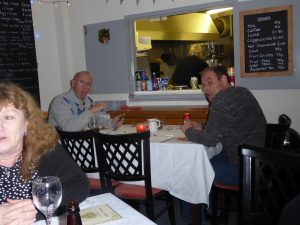 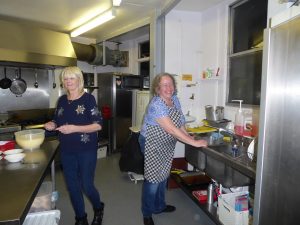 Sunday 17th.  A light to  moderate SE'ly blew in low cloud and rain as a front crossed the site late morning bringing a spell of rain.  The wind veered into the W by early afternoon, but the decrease in the amount of cloud or the increase in the height of its base never reached the values required for flying to commence.