Thursday 21st.  Overnight rain had cleared but left a cloudy, murky day with a light SE'ly flow, the weather remaining mild.  All 6 ATs on the day were flown in K21 JVZ, with Mr A Brown flying 4 of them in the company of either Bob Beck or Andy Parish, while the day's only First Flight pupil had the longest flight of  the day at 23 minutes.

Friday 22nd.   A foggy morning in the Vale of York as a light ESE'ly blew, this transforming into low stratus as the wind picked up to light to moderate as it veered into the SW.  This transformation prevented any flying, as Andy Parish's photo shows. 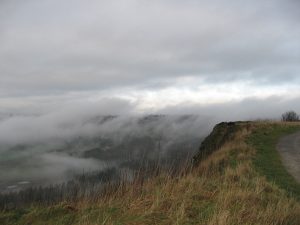 Saturday 23rd.  A moderate W'ly that slowly backed into the SW over the course of the day, provided winching conditions that led to 11 launches, with 2 ATs also flown.  These 13 launches generated 8 flights giving times in excess of 30 minutes, including 3 > an hour.  The two seater fleet was boosted by the return of K21 KLW from its ARC, complete with a refurbished instrument panel, Andy Parish and Toby Wilson taking it for an 1 hour flight test off a high AT.  Les Rayment and Conrad Thwaites also had an hour in the DG1000, while Chris Booker had 1:33 in the DG303 both off winch launches.   Earlier, John Marsh in the DG303 and Mike Collins in the Discus had 53 and 58 minutes respectively off late morning and early afternoon winch launches.  The DG303 was also the steed for Bill Payton's 45 minute flight, while Fred Brown, first via a winch launch with A Petterson and then an AT with T Kirby, rounded off the > 30 minute flight time list with 44 and 35 minutes respectively.

Sunday 24th.  Christmas Eve brought a fresh and mild  WSW'ly  that gusted into the mid 40 kts, the wind speed and associated low cloud preventing any flying.

Monday 25th.  Christmas day is the only day of the year when flying is off the menu due to the contractual conditions associated with the original purchase of the site from the Church Commissioners.  However, the moderate to fresh SSW'ly with 30 kt gusts would have probably prevented any flying, although the tropical maritime air mass did give a maximum temperature of 12.2 C.

Tuesday 26th.  An overnight, southeastward moving cold front led to a marked drop in temperature, the day's maximum being just 3.6C, while the SW'ly flow had diminished to become moderate.  In spite of predominately sunny skies there was no flying.

Wednesday 27th.  Another sunny, but cold day with no flying, this time because the wind had become a moderate to fresh NW'ly, with gusts into the high 20 kts, a condition that provides hazardous conditions for take offs and landings.  The wind gradually moderated over the day but insufficiently for flying to commence.

Thursday 28th.  A moderate WNW'ly at the local RAF station at Topcliffe translated into a light and variable predominately WNW'ly as indicated by the site based instrumentation and windsock.  As a consequence, the 9 ATs off snowy runway 24 experienced sporting take offs and subsequent landings.  The first flight of the day saw Colin Troise and George Rowden in K21 KLW find some weak wave at 4,000' asl over Thirsk, this not providing any lift but certainly slowing the descent.  As height was lost, a return to the ridge found sufficient lift to maintain a height of around 1000' QFE and to extend the flight time to 1:08.  Mark Newburn in the DG303 and Rob Bailey in the Discus also made use of the ridge lift to extend their flight times, Mark having 1:09 and Rob 1:56, with Rob exploring as far N as Black Hambleton.    Later Tony Drury took the DG303 for another 1:06 to complete the list of 4 flights to exceed an hour.  Mike Collins in the Discus had 38 minutes while George Rowden took  the only First Flight pupil of the day for 37 minutes in KLW.  Colin Troise taking a second flight solo in KLW, elected to land on 30 due to the turbulence on the approach to 24, as did George Rowden with his First Flight pupil Mark Kennedy.  Toby Wilson practiced his BI chat with Albert Newberry in KLW before chatting to himself as he flew the Discus on the last flight of the day.  The following photos from Mark Newburn capture the start, middle and end of a pleasant, if cold day's soaring. 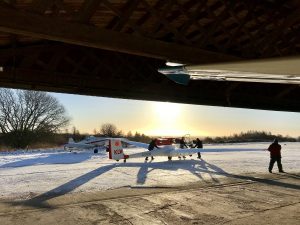 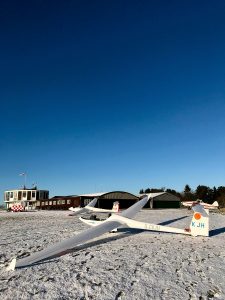 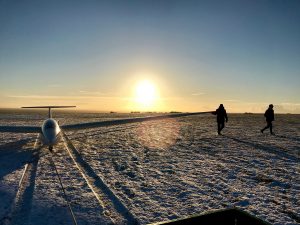