Monday 3rd.  A light to moderate W'ly that slowly backed into the WSW, plus sunny skies, provided a pleasant flying day, with even some vestiges of weak wave lift to delay the inevitable.  6 of the 10 aerotows off runway 24 generated flights of 30 minutes or more but nobody managed an hour, with Tony Drury, flying the DG303 having the day's best time of 37 minutes.   He was closely followed by Duncan Pask who flew the same glider for 36 minutes and by John  Carter and Geoff Turner who had the same time in K21 JVZ, while Tony and Duncan shared the last flight of the day in the DG1000 to record 34 minutes.  John Carter, flying with Peter Robinson in JVZ has provided the following photo of the wave cloud over Thirsk, while earlier John took this photo of a large Brocken Spectre and Glory. 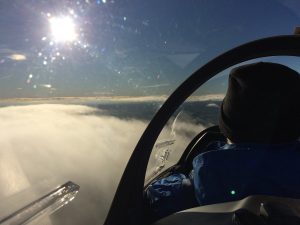 Tuesday 5th.   Monday's WSW'ly was still blowing, albeit having increased in strength to become moderate to fresh, so a winch day resulted.  Twelve winch launches were flown, 4 being for First Flight pupils, one of them, B Malone, having 46 minutes in the DG1000 with Andy Parish, during which they climbed to 6,300' asl in wave.  This was not, however, the highest climb of the day, this being by Steve Thompson in the Astir who reached 7,300' asl during his flight of 2:43.   Steve was one of 2 pilots to exceed an hour's flying time, the other, Lindsay McLane, having 1:20 in the Ka8.  Tony Drury had set the ball rolling by having 51 minutes in the DG303 off the first flight of the day, being the first of the 6 flights to exceed 30 minutes.

Wednesday 6th.  Cloudy skies and a moderate S'ly in advance of winter storm Caroline provided another day of flying, again with some wave activity.  The latter led to Andy Parish and First Flight pupil D Cook getting to 7,500 asl in their flight of 45 minutes in K21 JVZ, one of 3 of the day's flights to exceed 30 minutes.  The others saw Albert Newbery first take G Bullock for 30 minutes and then take P Gibson for 35 minutes before completing the day's flying with a 25 minute flight with J Bailey, all the day's P2's being First Flight pupils, with JVZ being the only glider used on the day.

Thursday 7th.  The continuing approach of winter storm Caroline brought moderate to fresh and gusty WNW'ly winds to site, with accompanying turbulence that was deemed to be incompatible with flying, so a non flying day resulted.

Friday 8th.  The passage of storm Caroline to the north of Scotland left the site with a gusty WNW'ly wind, the accompanying  clear blue skies allowing a continuous procession of snow depositing CuNims to be observed to the west of the Pennines.  The club welcomed 5 members of the Cambridge University GC, along with their K21, with one of their number, Chris Barrutt, taking the first AT off  runway 24 behind the Pawnee.  This launch was abandoned shortly after take off due to the effect of a large gust, but after consulting the wind speed read out from the automatic weather station a second launch was successfully accomplished, albeit with notable turbulence on departing the hill.  Once aloft, widespread lift was encountered so that a flight of 1:34 resulted, this including a foray out to Thirsk into a 30-40 kt headwind.  Only weak wave was encountered with the lift only extending up to around 3,000' asl.  While waiting for K21 JVZ to land, the other members of the Cambridge Univeristy GC rigged their K21 in readiness for flying, but with the wind speed increasing and the wind sock dancing around its pole, the decision was taken to abandon real gliding for  the day and revert to virtual gliding on the simulator.  This, however, did  not deter John Tayler and John Carter from taking the Eurofox on an O/R to Pocklington after lunch.