Monday 18th.   A light mainly W'ly wind with a high, thin cover provided a quiet gliding day, with take offs from runway 24 and landings on 20 and even 02.  11 ATs resulted, with K21 JVZ, the DG1000 and the DG303 utilised.  In the absence of any lift, it was once more a circuit day, with the day's 4 First Flight pupils topping the flight time list as a result of their higher tows.  David Bradley, Les Rayment and Will Blackburn shared the instructor duties, giving their First Flight P2s times of between 26-28 minutes.  Chris Thirkell, Geoff Turner and Alan Beaumont all flew JVZ solo while Steve Ogden flew the DG303, their flight times being between 20 and 25 minutes.  The day also saw John Carter take the Eurofox for a solo sortie after a dual with Paul Whitehead while later John took the following photo of the sunset.  Meanwhile the club received an early Christmas present in the form of the refurbished engine for Pawnee Tango Mike, initiating plans to collect a team to re-install the engine after the holiday break. 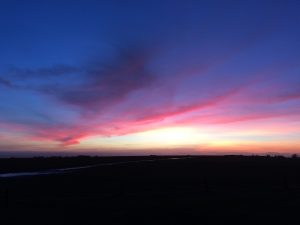 Tuesday 19th.  Another quiet day at Sutton saw 5 ATs flown off runway 24, the light WSW'ly not providing anything in the way of lift.  Only K21 JVZ was flown, with Fred Brown taking the only First Flight pupil of the day for 25 minutes, while Stuart Heaton and Chris Haresnape both flew JVZ solo to maintain their currency and A Bedford took advantage of the low demand to have 2 flights with Andy Parish.

Wednesday 20th.  A slow moving and weak cold front provided a lot of low cloud which covered the site over lunch time, a few drops of rain falling and the moderate SW'ly becoming a light WSW'ly later.  After lunch, the orographic cloud associated with the front slowly dispersed, allowing Tom Dale and Will Blackburn to take the Falke for an O/R to Breighton, the following photo being taken on the way back to Sutton. 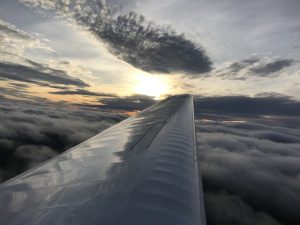 There was no other flying, but staff and members were busy on housekeeping duties including battery maintenance and disposing of some of the wooden chairs from the member's lounge, these having recently replaced with some new leather covered ones. Meanwhile, the owner of the Piper 120 that made an emergency landing on Saturday following a engine issue, returned to site with an engineer from Sherburn to assess the damage and plan the engine's repair.