Tuesday 7th.  A slow moving front brought a distinct wind change to site around midday, the moderate SE'ly becoming a moderate NW'ly , the change being also accompanied by the onset of rain, this lasting for the rest of the flying day, or should that be a non-flying day.  The inactivity on the airfield was, however, not matched by inactivity elsewhere as new straps were fitted to K21 KLW, restoring its aerobatic capability.

Wednesday 8th.  A transient ridge of high pressure brought light winds and blue skies to North Yorkshire, although the advance of the next set of fronts from the west became more obvious in the late afternoon as high cover spread in.  Flying commenced off runway 24 around 1000 hours as a light NW'ly blew, but after 7 launches, operations were switched to runway 20 as the wind virtually died before slowly increasing to become light to moderate from the S by the end of daylight hours.  The excellent visibility and the silky smooth air were ideal for the 7 First Flight pupils of the day and for those in training, while some more experienced pilots took the opportunity to keep up their currency.  20 ATs were flown, initially behind the Pawnee and then later behind the Eurofox, the latter earlier being the mount of Paul Whitehead and John Tayler as John undertook some  re-validation checks.  The lack of any lift meant it was an up round and down day, with nobody exceeding 30  minutes in the air, Andy Parish and visitor Adrian Neary getting closest with 27 minutes in K21 JVZ off the penultimate flight of the day, while Mike Greenacre in the Astir and Ken Arkley flying K21 KLW solo each had 26 minutes.  The arrival of the thickening, high overcast and increasing wind towards the end of the afternoon meant led to a marked drop in temperature so that the launch cabin became a popular location for some of those not flying, as the following photo shows. 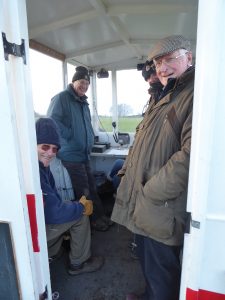 Apart from the tugging activities and the early operation of the Eurofox, powered operations included 3 Falke flights and the early arrival and later departure of a Eurostar from Felixkirk, the pilots being very appreciative of the facilities and welcome at Sutton.  A photo of the visiting aircraft is shown below. 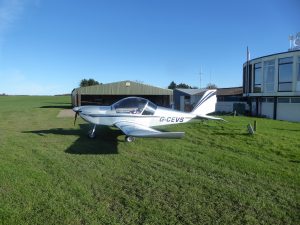