Tuesday 31st.  A moist, light to  moderate, WSW'ly airstream brought some overnight rain and copious amounts of low cloud  to the site, precluding any thoughts of flying.

Wednesday 1st.  The wind started off a light SSW'ly before becoming a moderate WSW'ly later in the day, the wind speed trace showing cyclical variation over the day, no doubt the result of wave activity, the latter being enjoyed by the day's pilots.  The initial launch at around 1030 hrs was off runway 24, but the southerly component of the wind and its strength led to an immediate change to runway 20, where the rest of the day's 18 ATs departed and landed.  However, David Campbell and Phil Turner, who took the first launch in K21 KLW, set the scene for the day by contacting wave and climbing to 5,500' asl in their flight of 1:15, one of 10 to exceed an hour on the day.  Phil later took the same glider for his first solo wave flight, enjoying 1:30 of soaring.  3 pilots went cross country, with Jesper Mjels covering 234 km in his DG400 with TPs at Bracken Bank, north of Penrith, and Aysgarth, his flight of 4:20 including a high point of 12,300' asl.   Rob Bailey, taking off in the DG303, climbed to 7,500' asl and visited Northallerton, Harrogate N and Masham to cover 118 km in his flight of 1:56, while Phil Lazenby took the Astir around Boroughbridge, Ripon, Masham and Knaresborough, a distance of 100 km, his flight of 2:43 including a climb to 9,500' asl.    Brian Brock, a new YGC member, had his first flights in the company of Tony Drury, clocking up a combined flight time of 1:34 from his two wave flights, while Day Course member Ian Weatherstone had flights of 44 minutes and 1:06 with George Rowden, the first getting to 4,600' asl and the second 7,000' asl.  7,000' asl was a popular height on the day, with John Carter reaching this height with each of his 3 pupils,  his flight with Ke Jing towards the end of the day in K21 KLW, finding some company in the form of Will Blackburn and First Flight pupil Syd Copper in  the DG1000, the gliders formatting around 5,500' asl as the following photo, taken by Will shows. 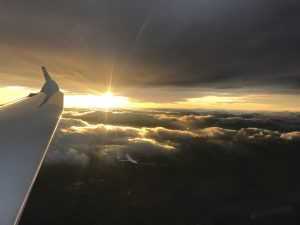 The above flights were towards the end of the day, those flying at the time being privileged to witness some dramatic lighting effects as the sun provided some horizontal rays through the low level wave clouds, as the following photo from John illustrates. 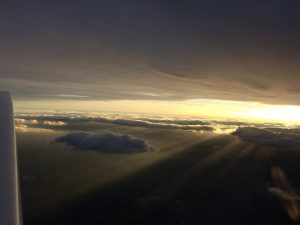 There were some very happy faces at the end of the day as the gliders, tugs and ground equipment was put away, while nature provided a fitting end to a terrific day's wave soaring with a spectacular sunset captured by John Carter. 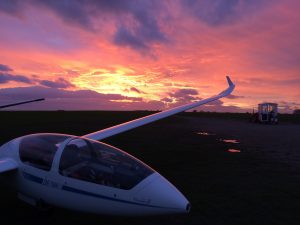