Thursday 2nd.  A light to moderate NW'ly with sunny skies opened the day, the wind decreasing to become light and backing into the SSW later.  19 ATs were flown, with conditions becoming soarable for a couple of  hours in  the early afternoon, Rob Bailey in the DG303 having 2:15 as he explored the ridge as far north as the Tontine and Mike Wood having 1:11 in the Ka8.   During the same period, Tony Drury took V Hannah, a guest of Steve Ogden, for a flight of 58 minutes in K21 JVZ, with Will Blackburn taking his namesake for 45 minutes in the DG1000.  All  the day's other flights did not  exceed 30 minutes with Will Blackburn's flight with R Clayton, one of the day's 3 First Flight pupils, coming closest with 28 minutes  and Steve Thompson and Alan Beamish having 26 minutes in K21 KLW.

Friday 3rd.  A light to moderate S to SW'ly flow was moist enough to provide a generally cloudy day, the base of cloud not restricting flying operations but also not providing much in the way of soaring opportunities either.  17 ATs were flown off runway 20, with Will Blackburn, on his last day of First Flight pupil flying, sharing the day's 5 pupils with Mike Smith.  Will then marked his final day with a solo flight in the DG1000, providing a low pass along the runway  with the approval of the CFI.   Will's 3 flights with First Flight pupils contributed half of the flights to exceed 30  minutes on the day, although Andy Parish topped the flight time list having 48 minutes in K21 KLW with Nev Smalley while also staying up for 38 minutes with John Dore in the same glider.

Saturday 4th.  A disturbance brought rain overnight Sat/Sun, its legacy being hill fog and then orographic cloud in a light to moderate NW'ly wind that delayed the start of flying until around 1245 hrs.  The first of the 8 ATs of the day also resulted in the longest flight, Andy Parish and Alan Patterson having 34 minutes in K21 KLW, the only flight to exceed 30 minutes.  The flight also demonstrated the lively nature of take-offs from runway 24 leading to a decision to cancel the day's First Flights and provide a group of visiting Scouts with more serene virtual  time on the simulator, this being provided by Tony Drury.  Two other flights came close to the 30 minute mark, Roger Burghall having 28 minutes solo in K21 JVZ and Les Rayment and J Shurten later having  the same time in the same glider.  With flying coming to an end around 1630, the way was clear for preparations for the YGC Bonfire and Fireworks party to take place with John Ellis and helpers constructing the bonfire and David Latimer and helpers setting out the fireworks in an open trailer.  Members, guests and visitors then retired to the clubhouse to enjoy a warming curry or chilli before the bonfire was lit around 1900 hrs followed by a splendid firework display enjoyed by all on a clear if chilly night as the following photos demonstrate. 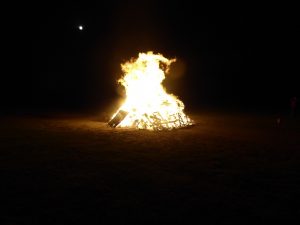 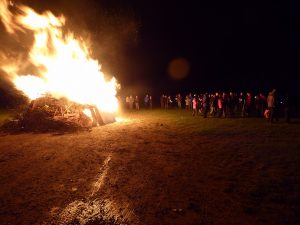 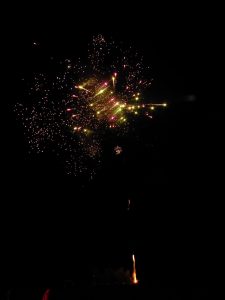 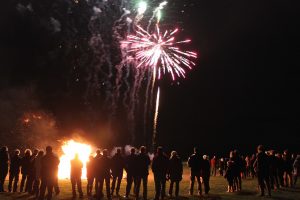 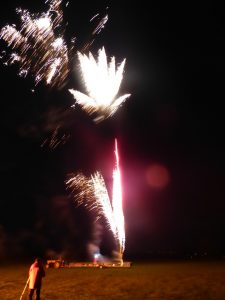