Sunday 5th.  A clear, blue sunny morning flattered to deceive as a steadily increasing NW'ly wind led to turbulent conditions not only on take off from runway 02 but up to 1500-2000' QFE.  An early batch of launches came to an end around midday when the decision was taken to suspend flying for a while to give time for the conditions to improve.  A resumption around 1400 hrs proved they had not so the day came to an end after a grand total of 5 launches, 4 ATs and a self launch by John Ellis in his DG800, John proving the day to be soarable by having just under 2 hours during which he explored the west edge of the North Yorks Moors as far north as the Tontine.  Noboby else got above 30 minutes flying time with John Carter and John Shaw getting closest with 27 minutes in K21 JVZ.

Monday 6th.  The coldest night of  the winter so far led to a rather murky  morning travelling to site, with the Vales of York and Pickering on the misty/foggy side.  There was bright sunshine at site and with the lower level murkiness not thick enough to hide landing fields in the event of a failed launch, flying got under way around 1045 hours when Mark Newburn took off from runway 20 flying K21 KLW solo.  Conditions aloft were benign with silky smooth air and even a few patches of zero sink to titillate the soaring senses. Mark was followed by George Rowden with the first of the day's 4 First Flight pupils and then by John Carter with Adrian Neary, one of two visitors from Shalbourne GC.  Brian Wise then took the 2nd of the day's First Flight pupils up but had to descend hurriedly as low stratus started to encroach on the airfield as the initially light SE'ly wind slowly strengthened. The presence of  the stratus led to a break in flying, which conveniently coincided with lunch time, but with conditions improving, flying resumed around 1340 hours.  The low level murk slowly cleared but not before John Carter, flying with Bob Symonds, the second of  the Shalbourne GC visitors, captured this very nice shot of a Brocken Spectre on the low level murk. 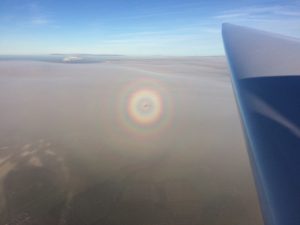 By the end of the day 12 ATs had been flown, all but one in either of  the K21's, the other flight being by Mark Newburn in the Astir.  Mark managed a flight time of 30 minutes, not quite long enough to match that of David Bradley and Jeff Mountain who had 36 minutes, although theirs did come from a Mile High flight. Colin Troise, David Watson and Tony Drury brought the day to a close by each flying one or other of the K21s solo, as medium level cloud spread in from the west.