Saturday 25th.  The day dawned sunny and cold, the cold resulting in iced wings on the gliders that delayed the start of flying until just before midday, AT operations being off runway 24 as a light W'ly blew.  18 ATs resulted until misting canopies led to the last AT being aborted on the ground run before flying was abandoned for the day around 1545 hrs.  The winds from the W were too light to provide consistent hill lift with only 2 flights exceeding an hour and a further four, 30 minutes.  Three of the latter flights came in a group between 1315 and 1445 hrs with  Chris Booker having 50 minutes in the DG303, Fred Brown and K Mullen, one of the day's 4 First Flight pupils, 48 minutes in K21 KLW and John Marsh and N Dodds 44 minutes in the DG1000, albeit off a 4,000' tow.  Earlier, Geoff Wright had had 1:03 in the Astir, while towards the end of the flying day, Bill Payton had 1:01 in the DG303 during which he climbed to around 4,000' asl in weak wave.

Sunday 26th.  Sunday was another sunny and cold day, with a light W'ly to start the day, this slowly increasing to light to moderate and backing into the SW.  The day's flying conditions resulted in 23 launches off runway 24, with the light winds at ground level being somewhat deceptive of conditions higher up, pilots reporting 4o kts at 4,000' asl and some weak wave to soar in.  Nick Gaunt, flying the Ka8 experienced some lumpiness on initial take off but thereafter climbed to around 4,500' asl, the strength of the wind at that altitude meaning he didn't have to do a single 360 degree turn in the whole of his 1:15 flight.  Indeed, the prospect of flying the downwind leg of the circuit going backwards was considered but rejected.  John Hart in his Vega flew the longest on  the day, 2:20, climbing twice to 4,000' asl in 1-2 kts of lift and venturing as far north as Black Hambledon to investigate some strange looking clouds there.  John also reported the upper wind to be 40 kts and from 330 degrees.  Other pilots to have in excess of an hours flying included Jesper Mjels in his DG400 with 1:54, Colin Troise in the Discus with 1:40, Steve Ogden with 1:31 in the DG303, Conrad Thwaites with 1:15 in the same glider, Paul Whitehead and Dave Muratroyd in K21 KLW with 1:08 and Bill Payton with 1:05 in the Astir.  10 other flights had times in excess of 30 minutes, the conditions also allowing 4 First Flight pupils to experience soaring.

Monday 27th.  Monday brought showery conditions in an initially light WSW'ly that slowly increased to moderate.  Flying initially got under way as the Eurofox towed John Carter and Tony Kirby off runway 24, their flight lasting 20 minutes.  A break in flying due to rain then ensued, with a restart around 1400 hrs, the launch method now being by winch, John Carter taking the first launch solo in K21 JVZ to confirm the hill was working, which it was.   Four further flights were flown with the DG303, K21 JVZ and the DG1000 in action.  Dick Cole and Nigel Burke in JVZ had 35 minutes on the hill, a time also emulated by John Carter and M Caddy in the DG1000.  Apart from John Carter's exploratory solo flight in JVZ, other solo flights saw Colin Troise fly JVZ for 26 minutes off the last flight of the day and  Jesper Mjels, fly the DG303 for 18 minutes.

Tuesday 28th.   A light to moderate NW'ly flow brought along a fair number of showers, the wind direction and strength plus the showers combining to make it a non-flying and cold day, the arctic air mass and wind speed providing a wind chill of -6.3C.

Wednesday 29th.  The flow of air from the arctic continued with the wind chill dropping to -7.3C, the moderate NWly being accompanied by frequent showers, these turning progressively to snow and giving the first covering of the winter, as the following photos show. 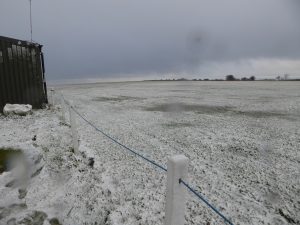 The cold and wintry conditions outside, however, did not extend to the inside, where 8 RAF pilots from Linton on Ouse had a warm welcome as they were introduced to gliding via a illustrated talk by Dick Cole followed by flights on the simulator with George Rowden assisted by Tony Drury, a mid visit lunch being provided by Liz.