Wednesday 27th.  A moderate E'ly was accompanied by low cloud and poor visibility, restricting flying to a single sortie by both K21 JVZ and the Falke.  JVZ, piloted by John Carter and Will Blackburn, went aloft to check the weather, their 18 minute flight confirming that the day was unsuitable for gliding activity.  The Falke , on the other hand, had a much more fruitful out to, and then a subsequent return from Kirton in Lindsey, the home of the Trent GC with Andy Parish and John Tayler on board, of which more later.

Thursday 28th.  After a dull Wednesday, Thursday dawned sunny with a light W'ly that had backed into the E by the end of the day as a active front made progress across the UK resulting in a wet night.  Some thermic conditions during the middle part of the day meant 8 flights exceeded an hour with a further 7 exceeding 30 minutes, 3 private owners launching.  Graham Morris in his ASW27, a regular visitor to Sutton, had 3:50, during which time he didn't stray too far from site, visiting Helmsley and Easingwold while also making an number of forays west.  Rob Bailey in his ASG29 also visited Helmsley and approaching Leyburn in his flight of 3:11, while Bill Payton, flying the DG303 went as far west as the East Coast mainline in his flight of 1:32.    Bill, this time accompanied by Nigel Burke in K21 JVZ, also had another flight in excess of an  hour, as did Graham Taylor in the DG303, John Carter and Ken Duxbury in the DG500, Tor Taverner also in the DG500 and Mike Wood in the Ka8 , cloud base eventually reaching around 4,000' asl.

Friday 29th.    Thursday's overnight rain continued into Friday morning, with around 20 mm falling in total, so the start of  flying was delayed until the middle of the afternoon, the passage of the front causing the initially light of moderate SE'ly to back into the WSW. providing some hill soaring for the day's 5 ATs.  Graham Morris took one of the day's 3 First Flight pupils for a 54 minute trip in K21 JVZ, with all 5 flights exceeding 30 minutes, Andy Parish's flight of 36 minutes with Nora v G in K21 KLW being the shortest of the day.  Graham Morris rounded off the day with a flight of 50 minutes in KLW with his better half.

Saturday 30th.   The light to moderate SE'ly veered briefly into the SSW over the middle of the day but then returned to the SE as the afternoon wore on, by which time rain had arrived, limiting  launches of runway 20 to 21.  The 2 seaters were busy with visitors in  the form of Scouts and First Flight pupils as well as club members, while the weak thermal conditions enabled the 2 private owners who launched to post flights of over an hour.  Thus Graham Morris had 1:31 in his ASW 27 while Darren Lodge had 1:37 in his LS8 with both pilots staying local.  John Marsh and D Murgatroyd had the longest 2 seater flight of the day, 37 minutes in K21 JVZ, with Chris Booker topping the club single seater list with 33 minutes in the DG303.

The YGC expedition to Millfield had its first day today and I have pasted in Colin Troise's report of the day's flying for those of you who don't have access to the Members page on the YGC website where Colin's report is posted.

The DG1000 was put in its trailer on Friday and Bob brought it to Millfield that day.  Other, more somnolent members arrived on Saturday with or without gliders, eagerly anticipating the wave that had been evidenced on the long trek northwards.  Hence, Bob and Martin, in the 1000, Tim in his ASW20, John in the DG800, and Colin in his 600, all got into wave. All except Colin got to 7000, Colin managing only 4500. Leas and Marian also flew the 1000, but struggled to stay in it.  Of course, it was Milfield Wave – complete with hydraulic jumps, rotor thermals, and an indescribable logic behind the whole thing.  TOMORROW may be flyable, but the wind may have other ideas!

Sunday 1st October.   October got off to an inauspicious   start as a moderate and moist SE'ly shrouded the site in hill fog, this persisting for much of the day and sometimes being accompanied by light showers.   Needless to say, there was no flying.

Today started off a little overcast, but with evidence of wave, though there wasn’t a great rush to sample it. However, Alistair took Steve (Mynd) for an aerotow checkride in the DG505, stayed aloft in wave, during which time an Astir and a Pik launched, then eventually landed. He and the tuggie described how ‘interesting’ the tow had been. Alistair also commented on the rotor, and the ineffectiveness of the stick, on the approach. However, undeterred, Colin and John both took a launch in their gliders, and were later followed by the Saltby Perkoz and our DG1000 with Bob and Marian.  All got into wave, which was as unstable as Milfield wave usually is and occasionally attacked the gliders with curtains of cloud.  The Perkoz reached 12000, Colin managed 11500, John got to 8500, and I have no report on the 1000.  During all this time the wind was increasing (40 kts at height) and eventually the launch point held further launches and suggested a quick return by other gliders. There wasn’t over much turbulence on the approach, but there was certainly a large amount of sink, and several pilots reported final turns at 1000 and approach speeds of 80 knots.  Everything is now packed away in readiness for the forecast gales tomorrow.  We have been joined today by Joan, Sue, and Dave B., and are about to partake of the traditional Sunday night group meal at the Tanky.

Monday 2nd.  A deep depression to  the NW of Scotland led to some overnight rain as a cold front crossed the UK and a legacy of moderate to fresh WSW'ly winds that gusted in excess of 40 kts, this keeping the gliders in the hangars.  Also in the hangar was a new tug, a Piper Pawnee, newly acquired from the Trent GC, the reason for the visit of the Falke there on Sunday 24th September.  A photo of the Pawnee is shown below, taken by John Carter, as the aircraft is given some TLC. 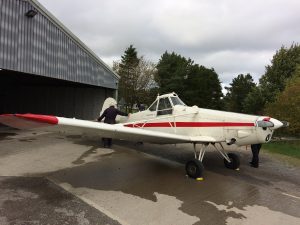 The Pawnee's arrival returns the club's number of  available  tugs to two, having briefly been down to one with an accident to the Super Cub putting it out of commission for a while.  Meanwhile,  work has started on refurbishing the engine on our existing Pawnee.

Horizontal windsocks! Very sunny, quite warm, so various sight-seeing trips, including tbe usual train from Berwick to Edinburgh (cheaper after 9.30).