Tuesday 24th.  A light to moderate SE'ly brought copious amounts of low cloud and rain, most of which fell before 0900 hrs as a waving front lay across the area.  The front started to move southwards leading to the wind increasing to moderate and veering eventually into the WSW, the cloud lifting off the site around 1500 hrs, but the improvement was insufficient to allow any flying.

Wednesday 25th.  The waving front had departed to the south but not before depositing another 10 mm of rain overnight, leaving the airfield very wet. However, with the morning satpics showing widespread wave, flying got under way just after 1000 hrs when Steve Thompson and Diane Thomas took an AT in K21 JVZ leading to a flight of 1:22, a climb to just under 10,000' asl and an excursion north to Osmotherly.  This set the tone for the day with at least 9 of the day's 25 launches leading to climbs above 6,600' asl.  The majority of these were from the 6 ATs of the day, a veer of the wind into the WSW coupled with an increase in wind speed from light to moderate to moderate around 1130 hrs leading to the rest of the day's launches being by winch.  Thus, Andy Parish and Nusrat Khan climbed to 11,200' asl in the DG1000 in their flight of 1:09, Will Blackburn and First Flight pupil Dave Moon climbed to 9,200' asl in the DG500, returning to land after just 39 minutes and Geoff Wright took Astir DPO to 11,400' asl in his flight of 1:47 during which he visited Ripon and south of Boroughbridge.  Those pilots launching by winch found contacting the wave somewhat more difficult with only 5 recording significant climbs.  Graham Evison with another of the day's First Flight pupils, climbed to 6,500' asl and returned in 36 minutes, Steve Thompson and Paul Bulmer got to 9,400' asl in the DG500, visitor J Bayford took his LS7 to 7,600' asl and Phil Lazenby, flying the DG303,  visited York, Wetherby, Masham and Carlton to record 145 km and a climb to around 10,000' asl, also providing the following photo. 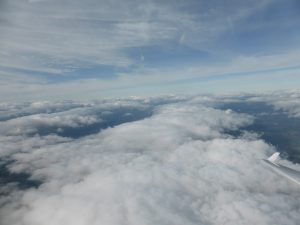 Bill Payton, flying the Discus for just over 2 hours visited Harrogate North and Leyburn while  recording a climb to 9,700' asl.  While significant wave climbs were not the order of the day for all those launching by winch, all but one of these flights exceeded 30 minutes with 11 being over an hour as the ridge provided reliable lift.  One of the winch launched pilots to exceed an hour was Nusrat Khan who, after his earlier AT with Andy Parish, took the last launch of the  day with Steve Thompson in  the DG500 and added another 1:06 to his log book.  The activity aloft was, however, matched by activity at ground level, as those not flying continued the task of painting the hangar doors which had been started by members over the previous weekend.  The following photo shows some of those manfully and womanfully undertaking this task taking a brief rest from their labours, with the results of their efforts gleaming in the background. 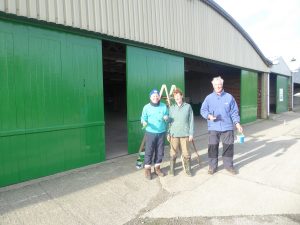