Thursday 26th.  A front brought rain to the  site from mid-morning to early afternoon but the clearance following the front's departure allowed flying to commence around 1500 hrs, with 4 ATs for K21 KLW and 2 flights in the Falke being logged before bad light stopped play.  Take offs were from runway 24, but the light W/WSW'ly wind allowed landings on runway 20.  Will Blackburn and First Flight pupil, Eric Janrowski, had the longest flight of the day, 25 minutes off a 3k QFE launch behind the Pawnee, with Andy Parish and Nusrat Khan next longest with 20 minutes off the same launch height.  Alistair Brown and Paul Frost, both with Andy Parish as instructor, flew the other 2 flights in KLW.

Friday 27th.  Anticyclonic conditions brought clear sunny skies and a light Wly flow that strengthened and backed to become a light to  moderate SW'ly, the sunshine even producing some Cumulus post midday.  The conditions led to 25 ATs being flown, with 3 of the club's two seaters and 2 of the single seater fleet being utilised, the two seaters accommodating club members and the day's 5 First Flight pupils.  In spite of the sunshine and some post midday Cumulus, soaring opportunities were at a premium, with only 4 of the day's flights exceeding 30 minutes, with one of these by Will Blackburn and R Estill taking advantage of the latter's Mile High package.  The day's soaring window was confined to a spell between 1500 and 1545 hours when John Marsh and J Dore flew K21 for 49 minutes and Will Blackburn and his First Flight pupil, S Maude, had 44 minutes in the DG1000.  Mike Smith, taking off in the DG303 towards the end of this period had exactly 30 minutes, while Graham Taylor took advantage of a 3,5k tow to post 29 minutes in the same glider earlier in the day.

Saturday 28th.  A moderate to fresh WSW'ly wind, gusting at times into the mid 30 kts, meant it was a winch day, albeit a frisky one, with 31 launches flown off runway 24.    Somewhat surprisingly  the ridge lift was not consistent, presumably due to wave interference, although only 1 pilot had a significant wave flight, this being Nick Gaunt who climbed to 6,000' in his LS7.  The wave lift turned out to be as inconsistent as the hill lift with Nick landing out on the racecourse at Catterick, having been saved from an earlier land out by a friendly Buzzard who showed Nick were the low level wave lift was.  The only other pilot to venture far from site was Bill Payton who visited the forward ridge and also followed the main ridge as far north as Thimbleby in his 1:37 flight in  the Discus, while visitor B Soanes had the only other flight of > 1 hour with 1:04 in the DG303.  The two seaters had a busy day with club members, 5 First Flight pupils and 9 Scouts, with Paul Whitehead and Matt Price having the longest 2 seater flight of the day with 52 minutes in K21 JVZ, while John Tayler and K Kawalec had 48 minutes in the same glider.  52 minutes was also the time achieved by Toby Wilson in Astir DPO with Chris Booker getting close to this with 50 minutes in the Discus.

Sunday 29th.  Sunday was another generally sunny day with an overnight southward tracking cold front ushering in a cold, light to moderate NW'ly flow that resulted in the Sat/Sun midnight temperature of 12.7C to falling to 5.5C by 1800 hrs.  19 ATs were flown off runway 02 behind the Pawnee, with only 3 of the club's two seaters in action and a general lack of lift meaning that only 3 of the day's flights exceeded 30 minutes.  While a general lack of lift was the theme of the day, there were exceptions, the principal one being John Carter and Mark Newburn's 45 minute flight in the K21 KLW.   Releasing at 4,400' QFE, John and Mark found some weak wave over the forward ridge as the following photo shows. 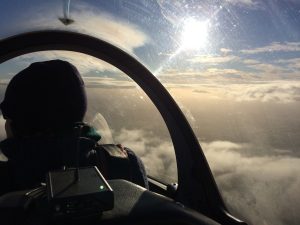 However, rapid cloud formation led to them being the meat in a sandwich with the only escape route through the resulting post box as illustrated below. 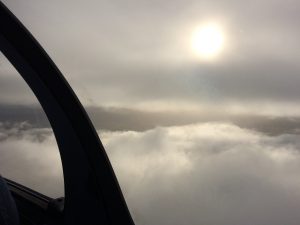 The only other pilots to get to or exceed 30  minutes were Colin Troise and Duncan Pask, who had 32 minutes in the DG1000 and Peter Goodchild and A Gibbs who had 30  minutes in the same glider.  The unstable air mass produced a few showers that briefly halted proceedings during the day but which also allowed a few romantically minded pilots like Paul and Polly Whitehead to set off in search of that mythical crock of gold. 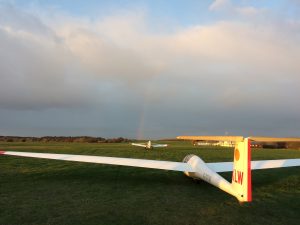 Sadly they returned empty handed and had to make do with an end of the day golden sunset. 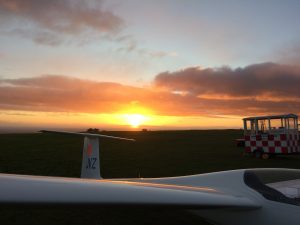 Monday 30th.  A light W'ly slowly backed into the S over the course of the day,  becoming light to moderate.  A high, but thin overcast gradually thickened, with precipitation (Virga) from medium level cloud being visible throughout the day but never reaching the ground until the end of flying.  14 ATs were flown off runway 20 behind the Eurofox, conditions aloft being as smooth as silk.  George Rowden and Mile High pupil Chris Donaldson had 39 minutes in K21 KLW off the 2nd flight of the day and this seemed to be the best the day could offer until Colin Troise, taking a 1000' QFE launch off the penultimate flight of the day solo in K21 KLW, found sufficient lift on the ridge between Gormire lake and the A170 ascent of Sutton Bank to maintain 600' - 650' QFE for 47 minutes, his flight being terminated by the late in the day mentioned above.  The day saw 8 solo flights with Andy Tyas having 3, all off 1000' tows, while Alan Beamont had 25 minutes in K21 JVZ off the first flight of the day.  Instructor Will Blackburn had a surprise Navex with Paul Whitehead in the Falke which saw them navigate to Raby Castle and back, the sortie resulting in a pass for Will. So well done Will for that and, as you enter your last week with us at Sutton, thanks for all the First Flight pupils you have flown here over the summer and autumn.