Wednesday 6th.  A light to moderate WSW'ly blew all day, providing hill lift and, later in the day, wave to enjoy.  31 ATs were flown, sandwiching 7 winch launches, which were flown in the late afternoon as the wind speed increased, before this  lessening, allowing a return to ATing .  34 of the day's flights exceeded 30 minutes, allowing the day's 5 First Flight pupils to have extended time in the air, with one of them, Matthew Tacon, a pilot with Yorkshire Air Ambulance, also experiencing a wave climb to around 8,000' asl with Paul Whitehead in the DG500.  Some 11 of the day's flights climbed to above 7,000' asl, with Stratford GC pilots Barry Kerby and P McAuley starting the rush with a flight of 3:13 in their Duo Discus during which they visited a number of TPs along the eastern side of the Pennines and reached 9,000' asl.  Barry, this time with Barry Monslow, had a later wave climb, this time off the winch, reaching 10,000' in their flight of 3:20.  Pilots climbing above 7,000' asl included Andy Parish and Nora v G in the DG1000 who flew north to Yarm south to Boroughbridge and west to Harrogate North, Phil Challans in Astir DPO, Tim Milner and Richard Croxford in the DG1000, visitor D Brown in his LAK 19, Will Blackburn in the Discus and Ron Beezer and Christina Griffiths who shared a flight in K21 KLW during which they climbed to 10,4oo' asl and visited Masham, Northallerton, Harrogate North and Boroughbridge. Christina's description of the flight, together with photos is included here. Ron Beezer and I had a brilliant flight on Wednesday afternoon in KLW.  We caught wave at around 4,300ft asl around Thirsk, and rose to around 10,400ft west of Leeming. 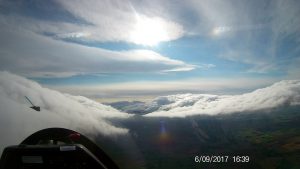 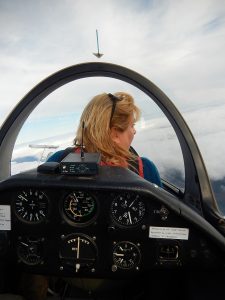 We saw a Hercules tracking up and down near Masham, which was about 1,000ft above us. We were also able to spot  'Thornborough henges 10 miles north of Ripon' 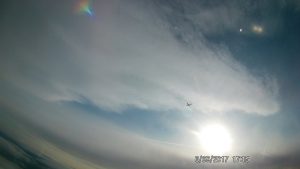 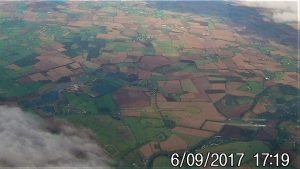 On the way back to Sutton Bank we still had 9,000 feet so we made a quick tour round Northallerton to use up some of our excess height.  We then had good fun threading our way through the clouds 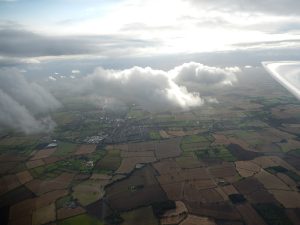 to see Thirsk and then the airfield and made a cross wind landing in gusty conditions on 24.  A fantastic flight, thank you Diane for letting us have your K21, thank you Andy for getting the tug out that you had just washed and put away.

The highest flight of the day was achieved by Jesper Mjels, who, flying his DG400, reached around 15,000' asl and visited Blanchland, Middleton in Teesdale, Barnard Castle and Pateley Bridge in his flight of 5:29.  Jesper was not the only pilot to exceed 5 hours in the air as Stefano Borini had 5:32 in the Ka8, achieving his Silver Duration so congratulations Stephano.  Contacting the wave was not,  however straightforward, as a number of experienced pilots  including Martyn Johnson and Nick Gaunt had to be content with hill soaring in spite of spending 2-3 hours aloft.

Thursday 7th.  Thursday dawned with a light S'ly wind that slowly veered into the SW but more importantly with lots of cloud and some showers that restricted flying to 2 ATs and 2 Falke sorties.  Both ATs were flown by Andy Parish and Diane Thomas in K21 KLW off runway 20, the low cloud base restricting launch heights to 1500' on the first flight and 1000' on the second, flight times reflecting this.

Friday 8th.  A light to moderate SW'ly veered into the W later in the day and increased to moderate providing some weak wave as well as convective activity, the latter being sufficiently vigorous to produce some showers, most of which missed the site.  The main launch method on the day was via AT, but there was a single winch launch, the latter allowing Barry Kerby and N Croxford to have just over 2 hours in Barry's Duo Discus during which they climbed to just under 6,000' asl.  Theirs was one of the 5 flights to exceed an hour, with two other pilots exceeding 2 hours, Jesper Mjels in his DG400 with 2:47, Jesper reaching around 6,500' asl and Geoff Gale 2:07 in his ASW 20, while visitor Steve Brown in his LAK 19 had just over an hour.  Andy Parish set the day off to a good start with 52 minutes in K21 KLW in the company of Richard Watson, and concluded the day with another flight over 30 minutes, this time 49 minutes with Paul Bulmer in K21 JVZ the inbetween period providing another 7 flights in excess of 30 minutes.  5 private owners flew on the day which also saw 6 First Flight pupils experience gliding first hand while the Falke had a single sortie.