Morning briefing suggested that the weather for the day would be "ordinary" in soaring terms with the overcast perhaps breaking to give some convection during the afternoon. Given the hectic days flying on Monday all the YGC crew who had helped to keep the queues moving were thanked.  The ground operation had been slick all day running winch and aerotow lines in parallel safely and without incident.

Reviewing the previous days heroics in wave, Phil Lazenby firstly summarised the achievements by club members on the day and then moved on to mention the mention lengthy, high and in some cases good distances flown in the old and slow gliders. Many of these were highlighted in yesterdays blog. Determining who should receive prizes was not easy with so many claiments. Corny Cornelius, John Castle and Angela Veitch came close for their efforts but top of the podium was Nick Gaunt who flew Justin Will's Rhonbuzzard for over five hours covering a large slice of Yorkshire in the process and taking the machine, it is believed, to its highest ever high point, a mere 83 years since it first flew. A close second ( on handicap!) was Mike Armstrong in his Sky who achieved the best height gain of the older gliders and managed to turn the ex Slingsby works at Kirkbymoorside. Even high in wave the flog back to Sutton Bank in the Sky into a 25 knot headwind  must have seemed quite daunting.

Slingsby Week tradition is that anyone managing to mess up in some way is given custody of the famous Slingsby Duck to take care of. So, perhaps unfairly, our own Paul Whitehead received this dubious honour. Why? On a day when the ridges were working very well triggering off a stream of good thermals leading to wave Paul managed a landout near the A19. His excuse? He was flying the YGC syndicate T21 which has been known to descend enthusiastically when flying through sinking air. He did also receive a bottle of wine to share with the retrieve crew, Polly pointing out that they were so numerous that each of them would have been lucky to get a sip.

The weather was perhaps not quite up to the forecast and there were only four launches by the Slingsy brigade. But two of these lead to a great spectator sport. Mike Armstrong and Justin Wills swapped gliders allowing each of them to clock up a first on type. A bunch of curious pilots on the ground gathered to observe their efforts and as they descended to a few hundred feet on the NW face of the hill bets were taken as to which would land first. It took a long long time before this was resolved. For an hour or more the Rhonbuzzard and the Sky battled to outdo the other at heights ( or should it be lows) between about 250 and 400ft. We were not sure whether either of the pilots wanted to "win" the battle - it was either a wish to prove who was the better pilot or a wish to see their own machine gain supremacy. CFI Andy made it clear that any lesser mortal in the club attempting to emulate this display would be likely to spend a considerable time on ground duties.

Pic below shows the T21 in a field slightly better than our own! 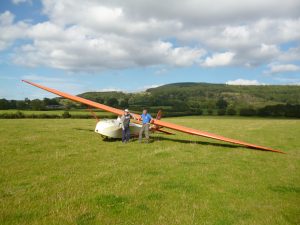 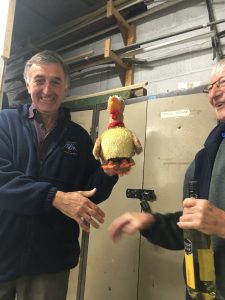 Paul gets the bird!