Thursday 24th.  A light to moderate SW'ly blew all day, being accompanied by extensive cloud and a few showers that interfered with flying late morning.  Conditions slowly improved in the early afternoon with the hill working at low level and some convective activity late afternoon to interest those on the ground.  The Task Week competitors had been given a selection of 12 triangles to choose from, ranging from 27 km to 313 km, the 3 smallest triangles being only available to pre Silver Distance pilots.  John Marsh took off in his DG303 just before 1500 hrs and thus encouraged the other Task Week entrants to launch, a flurry of activity beginning at around 1430 hrs as shown in the following photo. 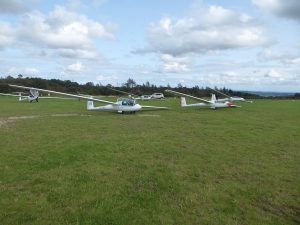 In the event, only one triangle was flown, the Sut/Northallerton/Carlton/Sut triangle of 53.7 km by John Ellis in his DG800 who accumulated the greatest number of points on the day.  Virtually all the rest of the 9 flights which exceeded an hour were flown by Task Week pilots, with John Ellis having the longest flight with 2:41, being joined by John Marsh with 2:22 and Jon Hart in his Vega with 2:10 in the >2 hour group.  A pleasant evenings flying saw Chris Booker fly the DG500 for 1:05 off the last launch of the day, with Tom Dale earlier having 52 minutes in the DG303 and Albert Newbery and David Lowden posting the longest club 2 seater flight with 47 minutes in K21 KLW.  The day's launch total of 24 AT's, which included 4 for First Flight pupils, was complimented by 2 Falke flights.