Friday 16th.  A light to moderate WNW wind greeted the day with wave evident and this was soon exploited by those taking off during the morning.  A slowly approaching weak front resulted in the skies becoming increasingly cloudy and the wind, while slowly increasing to  moderate, backing to become WSW. 16 ATs were flown, with flying continuing until around 2000 hrs.  Jack Maulas, the first of the 3 First Flight pupils of the day, all from near Salt Lake City in Utah, contacted the wave while flying with George Rowden in the DG500 and climbed to 6,100' asl during their flight of 37 minutes.  John Ellis, flying his DG800 used the wave to visit Carlton, Harrogate North, Pateley Bridge NE and  Catterick before returning to Sutton, 8/8ths cloud over and to the west of the Pennines inhibiting further ventures to the west.  John's flight covered 129 km and included a climb to just over 10,000' asl.  Rob Bailey, flying the Discus, also made use of the wave climbing to around 7,000' asl in  his flight of 1:16, but with the increasing cloudiness, using the wave became more difficult, with most later flights making use of hill lift, this including Albert and Martin Newbery who were airborne for 3:19 in their DG1000t.  Steve Wilkinson and Christina Griffiths had set the scene for the day with 1:33 in K21 KLW off the first flight of the day and Paul and Polly Whitehead proved that the wave was still around by climbing to 8,500' asl in the DG1000 after a 1600 hr take off in their flight of 2 hrs, visiting Leyburn and Ripon in the process.  Chris Booker, looking to achieve a 2 hour flight as part of his cross country endorsement requirements. just failed with a flight of 1:51 in Astir DPO.  Undeterred, Chris took DPO for another flight later,again achieving 1:51 and getting the day's consistency award.  In all, the day produced 7 flights of over an hour with a further 8 over 30 minutes, the Falke complementing this activity with 2 sorties.

Saturday 17th.  An extending Azores' high pressure system fed hot air over the UK, the maximum temperature at site reaching 23.2 C.  These temperatures did not,  however, generate easy thermal conditions, with the sky remaining blue for most of the day and the majority of soaring was via blue wave.  Rob Bailey, flying his ASG29t, abandoned his declared task due to the blue conditions on track to the north and then used the wave to cover 231 km, visiting Masham, Harrogate North, Settle and Tebay before returning to Sutton. Excellent visibility provided some spectacular views of the Peak District with the maximum altitude reached being around 11,000'.  Another pilot to abandon a declared task and then use the wave was David Latimer.  David flew his Ventus around Boroughbridge, Brough, Kendal, Masham and Ripon before returning to Sutton, a distance of 220 km, a flight that included a climb to around 10,000' asl.  David, like Rob, found the wave better marked in the lee of the Lake District but also much weaker.  Darren Lodge, flying his LS8 was another pilot to use the wave, getting to around 7,000' asl in his flight of just over 5 hours, while John Ellis climbed to around 6,000' asl in his DG800 during a flight of 3:36.  Les Rayment, flying his Ventus ventured south but found conditions to be less than ideal enroute to York and later near Rufforth, so much so that 2 engine burns were required to remain airborne.  However, Les' flight of 2:48 did include a climb to 5,700' asl, climbs to between 5 and 7,000' asl also being achieved by Peter Clay in his Ventus, Chris Teagle in his Nimbus, Martyn Johnson in his DG600 and John Marsh in his DG303.  17 private owner launches contributed to a busy launch point with 35 ATs flown in total, these including 4 First Flight pupils.  Albert and Martin Newbery flight of 4 hrs was one of 17 to exceed an hour, this list including Chris Booker with 1:41 in Astir DPO and Andy Hatfield with 1:00 in  the Discus. Dick Cole and Jan Vanderhoek's 59 minutes in the DG1000 headed the 9 strong list of flights < an hour but > 30 minutes on another interesting soaring day at Sutton.

Sunday 18th.  The continuing flow of hot air over the UK resulted in the maximum temperature reaching 24.6C at site, these high temperatures having a soporific effect on some pilots as the following photo shows. 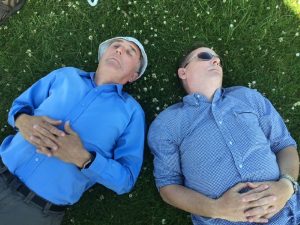 However, most pilots attempted to cool off by flying and hopefully climbing into cooler air, with Martyn Johnson being the most successful of  these, his 3:08 flight to Catterick and Masham including a climb in weak wave near Northallerton to a maximum altitude of just under 8,000' asl.  Conditions were generally blue, with only 5 of the 32 ATs of the day resulting in flights in excess of an hour, although a further 13 exceeded 30 minutes.  The latter total was helped by 5 of the 7 First Flight pupils of the day opting for Mile High excursions, John Marsh and Ron Beezer taking 2 such pupils, Jamie Kranz and Chris Lowther for 50 minutes each.  Ken Arkley in his LS8-18 and Andy Hatfield in the Discus both had flights of over 2 hours, Ken with 2:34 and Andy with 2:28, Andy finding some weak wave between Thirsk and Northallerton that allowed a climb to around 4,200' asl.  John Marsh also flew his DG303 for 1:08, with Jim McLean having 1:48 in his ASW24 and Malcolm Morgan 56 minutes in the Discus. The day persuaded 12 private owners to launch and the Falke had 3 flights, with flying coming to an end just after 1800 hrs.

Monday 19th.  With little change in the synoptic situation, the maximum temperature climbed further to 26.5C, these conditions leading to a 6,000' cloud base during the afternoon with thermal strengths to match, the wind being a light to moderate WSW'ly.  30 ATs were flown as most of  the club fleet and 8 privately owned gliders kept the launch point busy.  The best thermal conditions were over the North Yorkshire Moors but even here it was tricky at times as Rob Bailey found out in his ASG29t as he flew a 175 km task with TPs at the Tontine, Guisborough, Whitby Bridge and Danby.  Sea air incursion on approaching Whitby meant a retreat westwards to gain sufficient height to then reach this TP, while a weak sea breeze was encountered in the Vale of Pickering, this reaching Sutton Bank around 1930 hrs.  Rob has supplied the following photo of Whitby and its harbour. 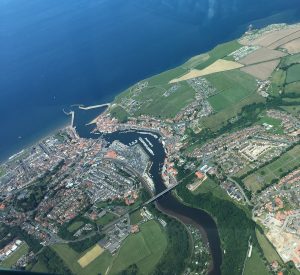 Martyn Johnson, flying his DG600 declared Sutton, Masham, Barnard Castle, Garforth and Sutton but abandoned this because of poor conditions to the south and instead flew an undeclared 167 km task that took Martyn to the better conditions over the North Yorkshire Moors after reaching Barnard Castle, with TPs at Carlton and Danby.  Steve Thompson, taking off in the early afternoon, flew 124 km in his Discus with TPs at Staindrop and Masham and Lindsay McLane visited Pocklington, Pontefract, Wetherby, Harrogate North and Pateley Bridge in his Ventus, his flight time being 4;32.  The day produced 13 flights of over an hour and a further 7 of more than 30 minutes, with Albert and Martin Newbery having 3:25 in their DG1000t, visiting Masham and Helmsley and Ken Arkley visiting Northallerton and Dishforth in his Ls8-18 during a flight of 2:37.  Those flying club gliders also benefited from the conditions with Geoff Turner visiting Northallerton while flying K21 JVZ solo during his flight of 1:48, Chris Knapp having 1:27 in the DG303 and Joan Wilson having 1:32 solo time in K21 KLW.  The day also saw a visiting Hawk Moth grace the refuelling area as the following photos, supplied by John Carter, show. 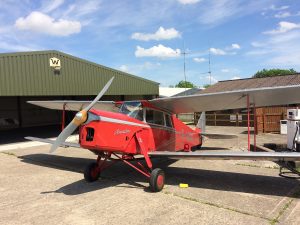 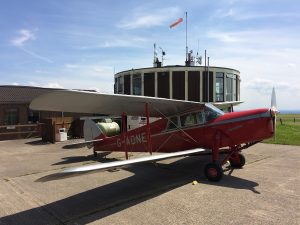