Sunday 30th April.  A moderate to fresh to fresh ESE'ly, gusting up to 30 kts meant it was a day where the hangar doors remained firmly shut.  However, this did not mean a day of sitting around drinking coffee/tea and putting the world to rights (at least not totally) for a number of members ventured out onto runway 24 to do some stone clearance.  The following photos by John Carter capture some of the action as Mark Newburn, John Marsh and Tor Tavener set to work and then, in contemplative mood, admired the results. 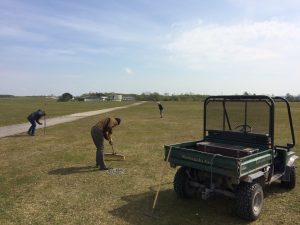 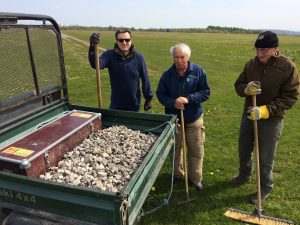 Monday 1st May.  A developing High Pressure over Scandinavia extended south over the UK providing a moderate E'ly flow over the site.  Initially cloudy skies did not deter some early aviation, but after lunch, the skies brightened considerably, providing some strong thermals for the members on the 2nd ab initio course of the year and visitors from the Peterborough GC to enjoy.  The result was a total of 13 ATs, 2 of which resulted in flights of over an hour, with an additional 3 over 30 minutes.  Mike Newton, one of the Peterborough GC visitors, and YGC member Chris Booker had 1:19 in  the DG1000, while John Carter and Chris Haresnape in K21 JVZ had an hour, during which they made good use of a 6-8 kt thermal.  John also had a 52 minute flight with Mike O'Neil in K21 KLW on a day when only the 2 seaters were flown.

Tuesday 2nd.  The wind had now become a moderate N'ly that veered into the NNE towards the end of the day.  Prospects for a exciting day's flying initially looked a little remote due to extensive cloud, but this soon broke up and after lunch a wave system set up that was readily accessed by AT.  19 ATs were flown in total, with 10 exceeding an hour, but with none of the remaining 9 exceeding 30 minutes.  Nick Gaunt was the only private owner to fly, exploring the wave upwind by jumping a few bars as far NE as Ingleby Bowl in his LS7.  A number of pilots took the wave to just over 7,000' asl, which appeared to be the maximum possible, including Mike Smith in the DG303 during his flight of just over an hour, and John Carter/Tony Kirby in K21 JVZ, their flight time being 1:09.  Photos from this and other flights by John are shown below. 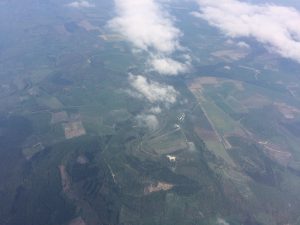 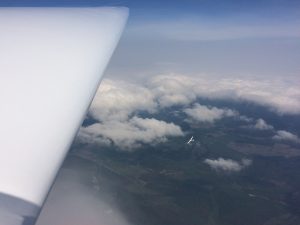 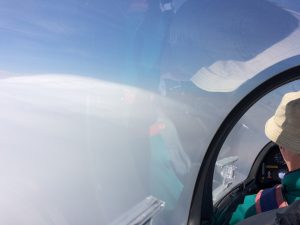 Tim Beasley and Mike O'Neil posted the longest flight of the day in K21 KLW, 2:18, while Tim had another flight of over an hour, 1:21 to be precise, this time with Phil Turner.  Others to experience the wave included Andy Parish and Peter Robinson with 1:25 in the DG1000 and Fred Brown and Les Grindrod who had 1:16 in the same glider as the Tuesday evening fliers took advantage of the conditions. Another of the Tuesday evening fliers, Alan Beamish, took the following photo of K21 KLW passing under him as he soared up to 6,000' asl in the other K21. 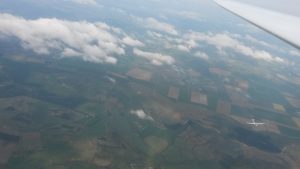 The wave was to be found downwind of both the western and southern facing ridges allowing flights to be made to Osmotherly to the north and Wass to the east of the site.

Wednesday 3rd.  With the Scandinavian high pressure still in charge, Wednesday saw the wind again from the N, having increased a little in strength to become moderate to fresh, with midday gusts into the high 20 kts.  The sunny conditions led to some thermal activity, but these were very broken, indicative of rotor thermals, and during the early afternoon some very impressive lenticulars developed first upwind of the site before slowly moving downwind.  Their attractiveness was purely visual, however, for in spite of many efforts, no significant wave flights were recorded, with all the day's soaring flights being via thermal lift.  Photos of  the downwind wave by Dick Cole and Graham Taylor are shown below. 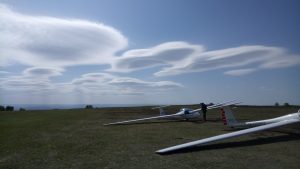 Dick initially took a morning tow to 3,000' QFE in the Discus on the first of the day's wave explorations, returning to earth after 40 minutes.  A later flight in the same glider, but this time via a tow to 2,000' QFE, saw Dick make use of broken thermal over the gully to the east of the site to record the longest flight of the day at 59 minutes.  This just beat John Carter and Chris Haresnape's 55 minutes in K21 JVZ, although they did set the longest AT of the day, 16 minutes, as they climbed to 4,000' QFE in a determined, but ultimately unsuccessful attempt to contact the wave, their personal temporary defeat of gravity again being via the day's thermal activity.  Other pilots to register on the list of the 9 flights to exceed 30 minutes, out of the 22 AT flown on the day, included Andy Parish and Andy Evans, who had 37 minutes in the DG1000, Duncan Pask, one of the 3 private owners to launch, who had the same time in his LS10 and John Carter and Mark Newburn who had 36 minutes in the DG1000 towards the end of the flying day.