Sunday 14th.  A cold front went through overnight depositing 7.6 mm of rain and leaving the site in a cloudy WSW'ly airstream, the wind being of moderate strength.  The post frontal cloud soon broke up and a good soaring day resulted, with 45 AT's flown, including 17 from private owners.  Pilots were soon setting off on cross countries or soaring locally as the cloud base of the scattered Cu rose to over 5,000' asl, with consequently 31 of the day's flights exceeding 30 minutes, of which 21 were over an hour and 13 over 2 hours. Steve Thompson in his Discus  went the furthest,  covering 88% or 266 km of his declared task around Guisborough, Malton and Richmond but abandoning his attempt to get to Pontefract after a low save near East Leeds under blue conditions.  Rob Bailey in his ASG29t flew 238 km around Tontine, Beverley and Pontefract also meeting blue conditions in the south and the same fate met John Ellis in his DG800 who completed 93% or 212 km of his task around Hawes and Market Weighton having to revert to engine power to get back to Sutton.  Martyn Johnson, on the other hand, visited 8 local and not so local TP's to cover 215 km in his DG600, none of which were in the blued out area and consequently considered it a cracking day, with even some  weak wave to explore.  All the above pilots registered flights of over 3 hrs as did Les Rayment in his Ventus, visiting Ripon, Boroughbridge, Rufforth, Pocklington and Fridaythorpe in the process, Nick Gaunt in his LS7 with 3:49, Peter Goodchild in his Pik 20 with 3:18, Conrad Thwaites in his Discus with 3:22 and John Shaw in his LS10 with 3:36, with mainly local TPs visited.  Bill Payton, flying the DG303, was another >3 hr pilot visiting York and Leyburn in the process.  Conditions locally were excellent as evidenced from the following photos provided by Chris Booker when flying Astir DPO, the first showing a strong thermal and the second the excellent visibility and the high cloudbase. 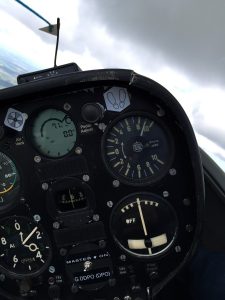 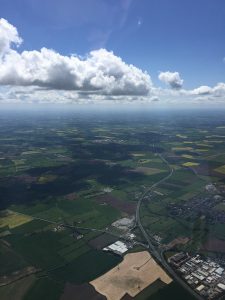 Tony Drury added to his cross country experience with a 93 km flight around the Tontine, Ripon and Helmsley in his DG303, while Messsrs Bourne, Whittaker and Smith, all visitors from the Southdown GC enjoyed a good day's soaring as they too explored the local area.  8 Scouts and 6 First Flight pupils choose a good day for their introduction to gliding, with Andy Hatfield taking 2 of the latter for 42 and 37 minute flights in K21 JVZ, while Paul Whitehead and A Batchelor had 54 minutes in the DG1000 and John Marsh and Tony Kirby had 52 minutes in the DG500.  Among all the above activity, the Falke had 3 flights.

Monday 15th.  A slow moving Atlantic front kept the site in a cloudy and wet, moderate to fresh SSE'ly flow all day, the rain being generally light and patchy, so there was no flying.  However, the break in flying did allow the recently returned Astir KRN to be fitted with its new S80 variometer and Becker radio and Astir DPO to be taken down the hill for its ARC after being derigged on Sunday.  Monday also saw the start of a Cross country course led by Andy Parish and Steve Wilkinson, with Toby Wilson, Peter Wright, David McKinney and Chris Booker eager to fledge their cross country wings.

Tuesday 16th.  Monday's front was still affecting the site at the start of the flying day, but then slowly moved south as the day progressed, the morning rain ceasing and the cloud base rising sufficiently to allow Tuesday evening flying to commence around 1700 hrs.  Your scribe left site around this time but subsequently, 10 ATs were flown, principally in the two K21's but also in rigged Astir KRN, while a single private owner flew to take advantage of the hill soaring conditions in the moderate SW'ly wind, this having progressively veered from its S'ly direction earlier in the day.  While no one exceeded an hour in  the air, 7 flights exceeded 30 minutes with Chris Booker having the longest flight of 54 minutes solo in K21 KLW off the last flight of the day.  Earlier, Toby Wilson had 46 minutes in Astir KRN and Ron Beezer and Christina Griffiths had 41 and 38 minutes from their 2 flights in KLW, while Kelly Teagle had 40 minutes in K21 JVZ with Lee Grinrod.