Sunday 16th.  Blue, sunny skies greeted the day as a light to moderate W'ly blew, this progressively backing into the NE over the course of the day.  In spite of the encouraging start, only 5 ATs were flown as the skies quickly clouded over with rain starting late morning and continuing on and off for the rest of the day, 9 mm being accumulated. John Carter managed to fit in an early Mile High flight with pupil Carter Wilson in K21 KLW, this lasting 38 minutes and being the longest flight of the day, with another of  the day's 3 First Flight pupils, Rich Richardson, having the second longest flight, 23 minutes in K21 JVZ with Graham Evison.  Ron Beezer and Bob Symonds topped and tailed the flying activity in JVZ, their second flight being curtailed to 7 minutes by the rain around 1130 hrs.  After putting away the gliders, tugs and ground equipment some pilots then retired to the simulator to continue their flying training.

Monday 17th.  Monday saw the start of the first holiday course of  2017, this one being for ab initio members, Alexander Davison, Bob Symons, Richard Morris and Peter Wright.  Their first day provided a light NW'ly flow and thermic conditions, enabling 21 of the day's 31 ATs to exceed 30 minutes, with 10 exceeding an hour.  The conditions encouraged 6 private owners to rig and fly, with some practising  their cross country skills, although the less than perfect conditions meant that Steve Ogden practised his  landing out rather than his cross country skills in a field  to  the south west of Osmotherly in the DG303.   Lindsay Mclane was aloft for 4:20 in his Ventus, although his cross country exploits remain a mystery, while Ben Dawson in his Cirrus explored the local area during his flight of 2:18.  Les Rayment in his Ventus was one of a couple of pilots to visit Pocklington in his flight of 2:17.  Most pilots stayed local, with Mike Wood having 1:08 in Astir KRN, Andy Tyas 1:17 in the same glider and Chris Knapp 1:04 in the Discus.  Colin Troise and Joan Wilson topped the 2 seater list with 1:22 in the DG500 while Tony Kendall and Richard Morris had exactly an hour in K21 JVZ.    The day's flying activities were completed by 3 Falke flights.

Tuesday 18th.  A light to moderate N'ly air mass provided some excellent soaring conditions for the majority of the day, although high cover truncated the soaring period, the wind slowly backing into the SSE by the end of the day.  The day's 44 ATs off runway 02 inlcuded 6 for private owners, with Steve Thompson in his Discus successfully completing a 219 km flight around Goole, Carlton and York. Disforth and Kirby Moorside were other TPs visited during the day, the good soaring conditions being illustrated by John Carter/Phil Lazenby's flight of 1:10 in the DG500 during which they flew from near Wombleton to the A1 and back to Sutton at 80 kts, the only turn being that at the A1 as they started their return to Sutton.  Average climbs of 4-6 kts and reliable clouds with a base of over 5,000' asl contributed to 15 of the day's flights exceeding and hour, with Rob Bailey having 3:47 in his ASG 29t, during which he took this picture of Saltburn on the Yorkshire coast while  overhead Guisborough. 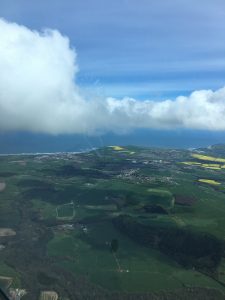 Rob's flight duration of 3:47  exceeded that of Steve Thompson by 10 minutes and that of  Tony Drury in his DG303 by 7 minutes.  Two pilots exceeded 2 hours; Peter Goodchild, following an aborted launch, with 2:56 in his Pik 20 and David Watson with 2:02 in Astir KRN, David testing his thermalling skills by recovering  from a deliberate low point after an hour.  Other pilots to exceed an hour included Colin Troise and Tom Dale who both had 1:28 in the Discus, while course members Richard Morris and Alex Davison had 1:30 and 1:11 respectively, Richard in the company of Kevin Kieley and Alex with Tony Kendall.  In among all this activity, the Falke had 4 flights and 5 First Flight pupils were flown.

Wednesday 19th.   A weak cold front slowly travelling SEwards made its presence felt with an 8/8ths layer of stratocumulus at around 4,000' asl, this occasionally being thick enough to generate some light rain, although this was not enough to interfere with flying.  Operations were off runway 20 into a light to moderate S'ly that slowly veered into the SW, the day's 13 ATs inlcuding 4 for First Flight pupils and the balance mainly by the week's course members, although Polly Whitehead took one of the two solo flights of the day in one of the K21s.   Ron Beezer was the other solo pilot as he flew his Nimbus 2 and, in spite of the uninspiring conditions,  managed the longest flight of the day, 42 minutes, by finding and using weak thermals over the valley immediately to the east of the site.  This source of lift was also used later by Tony Kendall and Bob Morris in K21 KLW, their 37 minute flight coming off a 1000' tow behind the Eurofox, although a subsequent attempt to repeat the exercise saw them quickly back on  the ground.   The day's 4 First Flight pupils all had between 25 and 29 minutes of flying time, the result of 3,000' tows and the occasional bit of lift.