Thursday 2nd.  An initially light to moderate W'ly led to a decision to AT off runway 24, but the wind speed soon increased to moderate to fresh with gusts around 30 kts, so after 2 ATs winching was the norm for the rest of the day, 16 being flown.  Hill lift and some thermal activity meant staying up was not a problem with both AT'd flights exceeding 30 minutes and the winch launched flights contributing 9 over an hour and an additional 7 over 30 minutes.  In spite of much investigation and trying, there were no significant wave flights although a few pilots climbed to around 3,500' asl.  Jesper Mjels had 3:36 in the DG303 with Conrad Thwaites having 1:47 in the Discus, both from winch launches. A clutch of pilots had around an hour of soaring, these including, Steve Ogden with 1:08 in Astir KRN, Roger Burghall with 1:10 in the Discus, Paul and Polly Whitehead with 1:07 in K21 KLW, Les Rayment and Duncan Pask with 1:06 in K21 JVZ and Albert Newbery and David McKinney in the DG1000.  The day also saw 3 First Flight pupils experience hill soaring.

Friday 3rd.  A cloudy start to Friday in a light to moderate SE'ly soon went downhill as the wind slowly backed into the E and rain commenced around 1330 hrs.  The rain continued until 2130 hours, with 14,7 mm recorded, a non-flying day being the inevitable result.  However, those members who  had gone to Pocklington for winch training managed to get in a morning of circuits before the rain came.

Saturday 4th.  An Atlantic low over Ireland sent its fronts across the UK, adding another 13.5 mm of rain overnight and keeping the site in cloud until the early afternoon, the wind being a light SSE'ly that slowly strengthened to light to moderate as it backed into the ESE.  Although conditions brightened, the moist airstream produced a steady stream of  low orographic cloud that prevented any flying.

Sunday 5th.   A bright start to Sunday in a light to moderate SE'ly saw flying start just after 1000 hrs and continue until just before 1400 hrs before light rain from an increasing cloudy and lowering base sky led to the cessation of flying, the wind by this time having backed into the NNE.  18 ATs were flown , with members of the Durham University GC, a group of Scouts and a single First Flight pupil providing the majority of the day's flights.  A lack of any usable lift meant flight times were low, with nobody exceeding 20 minutes, this particular time only being achieved by Brian Wise and Mark Brewer in the DG500.  Andy Hatfield and Scout Charlotte Knight had 19 minutes in K21 KLW, with John Carter having two 18 minute flights, first with Ali Prissi from Durham University and then with Scout Olivia Karzani, both in KLW.

Monday 6th.  A light to moderate NNW'ly blew all day, bringing some showers, but doing little to dry out the airfield which, after some more overnight rain, was deemed to wet to operate from.

Tuesday 7th.  An initially light NW'ly brought sunny skies, with high cover to the SW presaging the forecast arrival of a front much later in the day.  Flying started around 1020 hrs with the Super Cub operating off runway 24, landings being on 20 as the wind slowly strengthened to become eventually S'ly and light to moderate.  15 ATs were flown with the prospect of some early season thermal soaring being dampened, but not literally, as a large area of high overcast made rapid progress NEwards, leading to a period of limited heating around lunch time, much better conditions being visible over the Wolds.  During early afternoon, the skies cleared and some thermal activity resulted, allowing Ken Arkley to have a 1000' thermal climb in the DG303 during his flight of 47 minutes, with the majority of other flights just failing to reach 30 minutes.  Thus John Carter and Joan Wilson had 29 minutes in K21 JVZ, George Rowden and Mike Costelloe, one of the 4 First Flight pupils of the day, having 28 minutes in K21 KLW and Mike Smith having 27 minutes in the DG303.  Mike, however, later did have a flight of 31 minutes in KLW with the day's Mile High pupil, Phil Neesam.  The day's flying also included a single sortie in the Falke.

News from New Zealand.  Andy Parish, now sporting a beard and a tan, reported that his sojourn in New Zealand has coincided with the worst summer for 30 years, the airfield from which the gliding club operates being out of action for a while due to flooding.  However, he has managed to accumulate some 66 hours of flying, 16 of these solo, and flown in the central district competition in a shared DG100, with the 3 flying days of the week long competition all falling on  his allocated days.  His time in New Zealand has provided some good wave flights, with climbs up to 15,000', albeit, at times, via the roughest tows and rotor thermals he has experienced, .  On a recent flight towards the east coast of North Island, solo in a DG1000/18,  Andy took the following picture of the generally unwelcoming terrain. 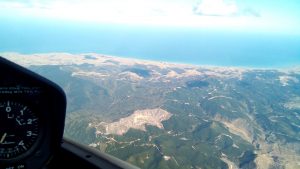 Another photo from New Zealand, this time  from Lindsay McLane via Jesper Mjels, shows some spectacular,  low level, Kelvin-Helmholtz waves, caused by wind shear, over Christchurch. 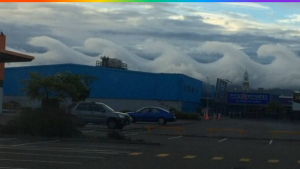