Saturday 11th.    A light to moderate SSE'ly that slowly backed into the SE brought a low overcast that prevented any flying.

Sunday 12th.  An Atlantic front crossed the site around 0500 hrs depositing 11 mm of rain, its residual cloud slowly clearing and allowing flying to commence around 1130 hrs.  13 ATs were flown before flying stopped just before 1600 hrs.  Limited soaring opportunities meant that only 2 flights exceeded 30 minutes and none an hour, Andy Hatfield taking one of the 4 First Flight pupils of the day for 33 minutes in K21 KLW, while Toby Wilson had 30 minutes in Astir KRN.  John Marsh and Tony Drury made a valiant, but ultimately unsuccessful, effort to join the >30 minute group with 28 minutes in K21 JVZ, as did Darren Lodge with 26 minutes in KRN.  Rob Bailey, on the other hand, spurned real flying for a spell  on the simulator.

Monday 13th.   A light WNWly soon backed into the W and strengthened to become moderate providing some hill soaring that was accessed by AT.  11 launches were flown, complemented by 4 Falke flights, and while nobody stayed up for an hour or more, 7 of the day's flights exceeded 30 minutes, this including the day's only First Flight pupil. Albert Newbery and Geoff Turner had 54 minutes in K21 JVZ and Steve Thompson and Chris Stothard 50 minutes in DS2.  Howard Marshall, flying K21 KLW solo, had 46 minutes, with Mike Smith having 39 minutes in the DG303. Alistair Monkman and Andy Wallace, both experienced RAF/Commercial pilots, started on a 4 day course with the objective of restarting their gliding, spending time of the simulator as a first step under the tutelage of Paul Whitehead.

Tuesday 14th.  A moderate Wly meant it was winching day  but only 4 launches were flown before a wind strength increase to fresh, with accompanying gustiness, resulted in flying being abandoned for the day.  The three two seater flights in K21 JVZ all made use of the hill lift, John Tayler taking two of these, the first with Kurat Khan posting a time of 42 minutes and the second with Phil Turner lasting 25 minutes.  An identical time was then flown by Dick Cole and Alistair Monkman in the same glider.  Bill Payton, flying the Discus contacted wave and eventually climbed to 10,000' asl in a flight that took him to the north of Ripon and lasted 2:30.

Wednesday 15th.  A cloudy start in a light to moderate SSW'ly saw flying commence off runway 20 just after 1000 hrs, a lack of much in the way of lift meaning that flight times were of the extended circuit variety.  However, the veering of the wind into the WSW and an increase in strength to moderate led to a change in operational runway from 20 to 24 and  the setting in of very usable wave around 1300 hrs.  This was first sampled by Polly Whitehead as she undertook her Winter spin checks with hubby, Paul, and then more completely by Graham Evison who took Joroam Vasms, one of the 2 First Flight pupils of the day, to 9,000' asl and back in 38 minutes while flying K21 KLW.  Most flights after that contacted the wave, giving 6 flights of over an hour and a further 7 over 30 minutes from the day's total of 30 launches.  Graham Taylor, flying the DG303 had 2:07, climbing to 9,600' asl, while Duncan Pask in the Discus climbed to 10,000' asl in his flight of 1:16.  The best looking wave clouds were to the northwest, but due to a Notam'd, significant, vertical extension of the RAF Leeming MATS were inaccessible.  Nevertheless, the available wave was enjoyed by all the pilots who contacted, including Sue Ahern in Astir DPO and Steve Ogden in Astir KRN who climbed to 6,000' and 9,000' asl respectively.  John Carter and ex RAF pilot Andy Wallace climbed to 9,000' asl in the DG500, with Andy declaring the experience superior to flying the F117.  Steve Thompson and Chris Stothard  were another of the 2 seater pilots to enjoy the wave with 1:02 in K21 JVZ, reaching 7,000' asl.   Complementing the day's activity were 5 Falke sorties.  An enjoyable day's flying was made additionally special as course members Andy Wallace and Alistair Monkman re-soloed after a break from gliding or 35-40 years.  Graham Taylor has provided the following photos of the wave system. 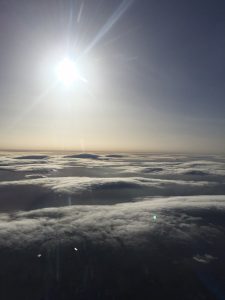 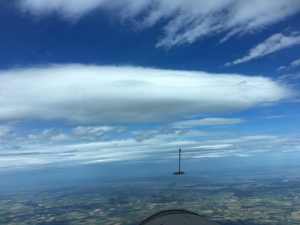 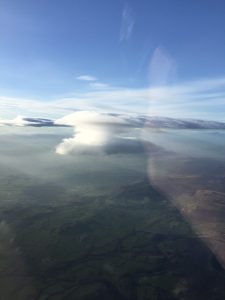