PPS to Wednesday 15th March.  The report of Steve Thompson/Chris Stothard's wave flight down to RAF Linton on  Ouse motivated Mike Wood to find and send me some photos of RAF Linton on Ouse taken during a wave flight in the 1970's (with an Instamatic camera) the photos being included below. 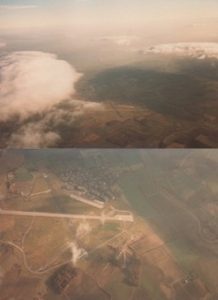 Thursday 16th.  A fresh W'ly started the day, this declining to moderate over the course of the day as it backed into the SW.   Nine winch launches were flown, the first at around 1030 hrs with the last landing at 1630 hrs.  The day's hill soaring conditions allowed pilots to get to the forward ridge/Cowesby Bowl and Black Hambleton, although getting above 700' QFE seemed problematical.  The day's only First Flight pupil chose an interesting day to experience soaring, while 3 of the day's launches resulted in flights of over an hour and a further 4 of more than 30 minutes.  Nusrat Khan had 56 minutes off the first flight of the day with Derek Smith in K21 JVZ before having 59 minutes in the DG500 with Albert Newbery off the last flight of the day.  In-between these 2 flights, Paul Whitehead and Adrian Wallace had 1:16 in the DG500, Derek Smith and Joan Wilson had the same time in JVZ and Albert Newbery and David McKinney had 1:07 also in JVZ.

Friday 17th.  A gusty W'ly that increased in strength as the day progressed, gusts into the high 30's being recorded, was accompanied by extensive low cloud, the wind strength and cloud base meaning there was no flying at Sutton.  A similar situation prevailed at Pocklington where the planned day of winch launch training was scrubbed, the principal reason here being the cross wind component on the most favourable runway.

Saturday 18th.  Another cloudy day, but the major amounts of  cloud were at medium level, allowing operations to commence off runway 24 behind both the Eurofox and Pawnee tugs into a light to moderate W'ly.  This soon increased to a level that meant a change to winching was implemented around 1100 hrs, this launch method continuing until around 1515 hrs when a extensive shower meant a enforced lull in flying activities, the post shower reduction in wind speed meaning a return to ATs.  This change was short lived, for after only 2 launches, more extensive shower activity meant an end of flying for the day.  The day did, however, generate 26 launches, 20 via the winch and the balance by AT and with a group of Scouts/Leaders from Durham City plus 3 First Flight pupils plus members, the launch point and two seater fleet were kept busy.  Pilots found reasonably consistent hill lift, its smoothness and ability to get flights to around 1,300' QFE at times suggesting a modicum of wave influence.  Flying was mainly confined to the main ridge between Sutton and Boltby reservoir although the forward ridge, Cowesby Bowl and the ridge just north of Black Hambleton were visited.  3 flights exceeded an hour with a further 7 exceeding 30 minutes, all the > 1 hour flights coming from winch launches.  Oliver Bosanko, a visitor from Gransden Lodge, made the most of the hill soaring conditions by having a flight of 2:25 in his ASW20 off the first winch launch of the day, with YGC's Duncan Pask having 1:46 in the DG303. Paul Whitehead took Julia Robson, another visitor from Gransden, on a 1:03 familiarisation flight in the DG1000.    Tony Drury had 53 minutes in the DG303 from one of the early ATs, while Martyn Johnson and Charles Willowby, with 48 minutes in K21 KLW, and Paul Whitehead/Tony Kirby, with 43 minutes made sure the AT based flights featured in this report.