Rob Bailey provided the following photo of the wave that gave climbs to around 5-6,000' asl. 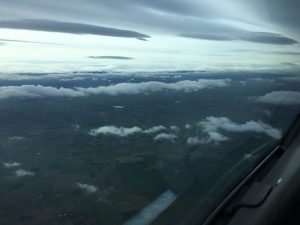 Wednesday 22nd.  A fresh W'ly blew all day, with gusts approaching 40 kts and although the wind shows signs of moderating over the course of the day, the conditions never became suitable enough to consider opening the hangar doors.

Thursday 23rd.   Storm Doris duly arrived, bringing plenty of rain, 31.8 mm, that lasted until around 1700 hrs, but sparing the area of the high and gusty winds that caused damage further south.  In fact, the start of the day saw a S'ly wind of 5 kts, this becoming a moderate to fresh N'ly by the end of the afternoon, with gusts of up to 44 kts.  The switch in wind direction was also accompanied by a marked drop in temperature from 6.8C @ 06oo hrs to 1.1C @1700 hrs, a pressure of 974 mbs being recorded at 1100 hrs.  With all this weather around, there was no flying.

Friday 24th.  Doris's legacy was to leave the site in an unstable NW'ly that backed into the W/WSW later in the day, the initially moderate flow  decreasing to become light to moderate.  The sky soon was dotted with nice looking Cu that promised more than they delivered, the day's 28 ATs only delivering 5 flights of over 30 minutes, although Colin Troise flying K21 KLW solo, almost made the hour mark with 58 minutes.  Colin reported very weak lift low down but up to 2 kts close to cloud base, this peaking at around 3,200' asl.  Colin's was the only flight of the pre lunch session to exceed 30 minutes with the other 4 flights in this group all being towards the end of the flying day.  Thus Chris Booker had 40 minutes, like Colin flying KLW solo, Paul and Polly Whitehead had 36 minutes in K21 JVZ off the last flight of the day and Mike Collins celebrated his convesion to the Discus with an identical flight time of 36 minutes, so congratulations to Mike.  Tim Beasley, with one of the day's 5 First Flight pupils, almost joined the above group with 28 minutes in JVZ, as did Tor Tavener with the same time in the Discus.  During all this activity, David Campbell flew the Super Cub back from Bagby to site.

Saturday 25th.  The approach of another named winter storm, Ewan, saw the site in an initially moderate S'ly but this soon veered into the SW and increased to moderate to fresh, gusting to around 30-35 kts.  The real barrier to flying was, however, the extensive and low cloud base, this producing light rain at times.

Sunday 26th.  The worst of Storm Ewan had crossed the site overnight, leaving a moderate to fresh SSW'ly that backed into the S and increased to fresh over the course of the day.  With a cloud base of between 1900 and 1400' QFE, flying operations commenced off runway 20 behind the Eurofox, John Carter and Mark Newburn in the DG500 finding plenty of lift over the southern ridge and also over the SW/S'ly facing part of the main bowl.  They also found the wind speed at 900' QFE to be 45 kts, this contributing to a downwind leg ground speed of over 100 kts and the need to turn in early onto base leg, landing after a flight of 40 minutes.  They were followed by David Watson and Harvey Dunmore in K21 JVZ.   David and Harvey used the hill lift to generate a flight time of 42 minutes as they soared to  just below cloud base, the use of  the wave enhanced hill lift being restricted by the cloud .   The increasing wind speed and the already  lively approaches onto runway 20 led to a decision to terminate flying for the day, so that the group of Scouts scheduled to fly, only made it to the launch point before having to return to the clubhouse, the Pawnee similarly making it to the launch point before returning to the tug hangar.