Tuesday 31st.  A slow moving front brought moderate to fresh SE'ly winds, low cloud and rain to the site, the rain falling for most of the day with flying far from anyone's mind.

Wednesday 1st February.  The SE'ly flow continued, this time at a light to moderate strength as another front made slow progress across the UK.  The clearance arrived in the late afternoon, too late to allow flying to take place, and after around 9 mm of rain had fallen.

Thursday 2nd.   The month continued in a fashion  consistent with its February fill-dyke reputation, as another front kept the site in cloud and rain for most of the day, the wind being again from the SE but moderate in strength and gusting into the mid 30 kts.  As happened on Wednesday, the clearance behind the front came too late to allow any flying to take place.

Friday 3rd.  Friday turned out to be the first flying day of February, sunny morning skies clouding over in the afternoon, but this change not having any significant effect on flying operations.  The moderate SSE wind slowly backed into the ESE over the course of the day, with some early soaring on the southern ridge, as evidenced by the flight log which had the first four flights each recording times of >30 minutes, compared to the remaining 6 which did not. Tony Drury, flying K21 JVZ solo, had 50  minutes, Paul Whitehead had 43 minutes with Andrew Wilmus in the DG500 before having another 43 minutes with Tony Kirby in the same glider.  Geoff Turner, flying JVZ solo, completed the soaring pilots list with exactly 30 minutes of air time.  It was a good day for the two First Flight pupils while the Falke had a single flight.

Saturday 4th.  The light to moderate wind continued to blow from the S to SE sector and, with an improving weather picture, flying commenced around 1130 hrs and continued until 1530 hrs, by which time, 25 ATs had been flown off runway 20.  Some early gentle wave enabled Paul Whitehead to take his First Flight pupil, Richard Halkyard for a 46 minute flight in the DG500 and reach 5,000' asl, with Steve Thompson and Mike Wood also having a soaring flight of 37 minutes in K21 KLW.  The two seaters were busy with 5 Scouts and 5 First Flight pupils, one of whom had a mile high flight in KLW with Steve Thompson and landed after 31 minutes.  Others to exceed 30 minutes included Graham Evison, who took his First Flight pupil Paul Sutton for 33 minutes in the DG500 and John Marsh and George Claydon with 31 minutes in K21 JVZ.  The day encouraged 4 pilots to fly the two seaters solo, with Roger Burghall having 28 minutes in the DG1000 while Toby Wilson re-soloed in JVZ, so well done Toby.  The opportunity was also taken to derig the DG500 in advance of its forcoming ARC, this picture of the DG500 from Nick Gaunt suggesting this couldn't come a moment too soon as the gel coat on the inboard section of the port wing was getting exceedingly thin. 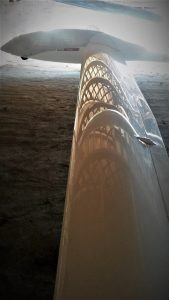 Sunday 5th.  The ESE'ly wind had become light and poor visibility delayed the start of flying until just after midday, flying then continuing until 1645 hrs with 21 ATs flown,  Encroaching low cloud/murk threatened  to interfere with the flying at times, particularly at the north end of runway 20, but with the light winds, take offs from 20 and reciprocal landings on 02 circumnavigated the problem.  Flight times, in the absence of any lift, were generally below 20 minutes, the exception to this being by Chris Gill and Nicola Dale, one of the day's 3 First Flight pupils, who had 25 minutes in K21 JVZ.  The majority of flying was in the two seaters as another 6 Scouts and members of the Durham University GC were flown, but Mike Collins and Graham Taylor ensured that there was some single seat flying as both flew Astir KRN, recording identical flight times of 18 minutes.

Monday 6th.  The majority of members arriving at the club for briefing had to endure a foggy ride through the Vale of York, but found the site in sunshine with evidence of tomorrow's bad weather already evident on the western horizon.  The opportunity was taken to put the DG500 in its trailer, with Ken Arkley, seen in the following photo, doing a check before taking the trailer down to NYSailplanes. 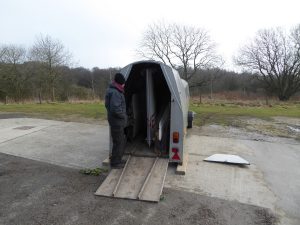 By the time Ken was ready to take the DG500 off site, the fog in the Vales of York  and Pickering had lifted into low stratus that enveloped the site as shown in the next photo. 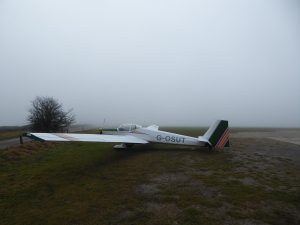 This did eventually clear, but patches of stratus kept coming and going, meaning no flying was possible, so around 1500 hrs K21 KLW was returned from the launch point on runway 20 and put away, together with the ground equipment and vehicles.  The day was not totally wasted as David Watson continued with advanced instructor training for John Marsh and Chris Gill and Mike Smith took the only First Flight pupil of the day on the simulator.