Sunday 19th.  A light to moderate SW'ly blew for most of the day, the wind backing into the S and decreasing to become light later.  Wave was evident for most of the day, but those contacting found very strong winds at moderate height which made progression up wind very difficult.  Two out of the 31 AT launches of the day led to flights of over an  hour, with a further 6 exceeding 30 minutes, as the two seaters coped  with eager club members and 5 First Flight pupils.  Jesper Mjels again took a high tow in the DG303 and posted the longest flight of the day, just under 2 hours, while Steve Thompson, flying the Discus towards the end of the flying day, had 1:20.  John Carter and John Shaw led the charge of the >30 minute brigade with 52 minutes in K21 JVZ, with solo pilots Steve Ogden in the DG303, Toby Wilson flying K21 solo and Rob Bailey in the Discus having 45, 40 and 38 minutes respectively.

Monday 20th.  The wind had now become a moderate to fresh W'ly, so it was a winching day, the gustiness of  the  wind, up to the mid 30 knts at times, plus episodes of low cloud and rain, leading to the cessation of operations on two separate occasions.  This limited the launch total to 13, these leading to 1 flight in excess of an hour and 6 more over 30 minutes.  The >1 hour flight was undertaken by who else but Jesper Mjels, who, having learnt at Saturday's member's forum that  the DG303 and Discus were underutilised, seems to have taken it on himself to remedy the situation, taking two flights in this glider, the first of 49 minutes and the second of 3:32.   Hill lift and some wave were the means of staying up, the visitors from the Peterborough GC making the most of the conditions with Steve Thompson taking visitor Tim Beasley for 31 minutes in K21 JVZ, before Tim took his fellow visitor Phil Jameson for 46 minutes in the same glider.  Steve also gave visitor Ryan Miller a 32 minute familiarisation flight in JVZ.

Tuesday 21st.  A light SSW'ly blew under a high, thin overcast as operations got underway off runway 24 behind the Eurofox.  Early flights found some weak wave over Bagby or further west over Thirsk racecourse, with maximum altitudes around 5-6,000' asl as low lenticulars formed over and to the west of the site.   George Rowden, flying the day's Mile High pupil, Simon Pearce in the DG1000, found sufficient lift to continue up to 5,700' asl after release, while the day's 3 other first flight pupils plus a returnee, also had experience of wave and hill lift.    The day's 19 ATs led to 2 flights of over an hour and a further 8 over 30 minutes, access to the wave being hampered at times by periods of extensive overcast, as the cloud slowly increased and the cloud base continued to fall in advance of an eastward moving Atlantic front.  The increased cloudiness was accompanied by an veering of the wind into the W and an increase to moderate in wind strength, this leading to the ridge working.  Rob Bailey in the Discus logged the longest flight of the day, 1:30, while Nick Gaunt had 1:02 in the Ka8.  Albert Newbery and Reg Rowlinson had 55 minutes in K21 JVZ, while others to have between 50 and 60 minutes included Dave McKinney with 53 minutes in Astir DPO and Alan Beaumont with 50 minutes flying K21 JVZ solo.   Albert and Stuart Heaton later shared a 47 minute flight in the DG500, which had returned to site courtesy of Ken Arkley earlier in the day after its ARC,  but Albert and Stuart had to curtail their wave soaring at 3,500' asl as the wave slot below them started to close.  The variable cloudiness and lowering cloud base led to two landouts, the first by Chris Thirkell in the Ka8, the landing being in a field close to the A170 and some 1.45  km from the club house, thus putting Chris in early pole position for the award of the Aux Vaches trophy for 2017.  The other land out saw visitors Mike Newton and Phil Jameson also get downwind of the site, but this time more comprehensively, landing out in a field near Old Byland.  The retrieve was aided by the local farmer who used his quad bike to tow K21 KLW out of the soft ground to a spot near the gate access.  The surprisingly-pleased-with-themselves-looking pilots are pictured below together, with a photo of John Carter happy to be starting the process of getting the glider back into its trailer as the weather continued to deteriorate. 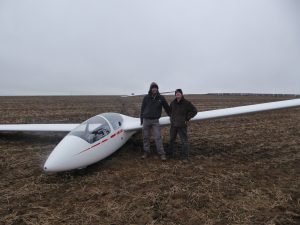 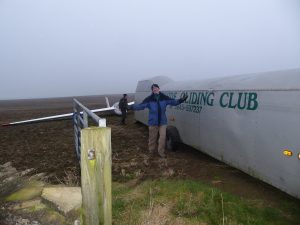