Friday 17th.  The hill soaring WSW'ly of Thursday had been replaced by a light to moderate S'ly, the sunny skies of early morning being progressively replaced as a weak front advanced across the UK.  4 ATs were flown before the lowering cloud base stopped launches, flying after that being undertaken by the Falke with 3 sorties.  Paul Whitehead and Mike Smith shared the instructor duties , Paul flying Phil Turner and Peter Marston in K21 JVZ and Mike flying Martin and Conaire Durkin in K21 KLW, flight times ranging from 15 to 19 minutes.

Saturday 18th.  Another weak front again affected flying, the moderate SE'ly slowly veering into the SW as the front approached, its associated patchy low cloud restricting AT launches to 9.  Jesper Mjels, taking the first launch of the day in the DG303, took a high tow and used up a significant amount of this before finding some wave over the east coast main line north of Thirsk, eventually climbing to around 15,000' asl and providing the following photos. 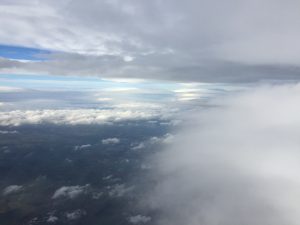 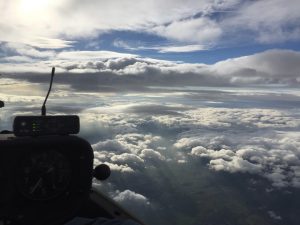 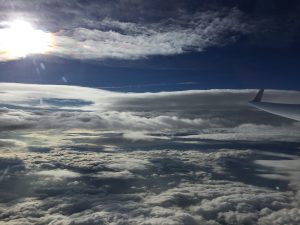 The final photo shows some nice iridescence in the cloud at the top of the picture, indicating it had recently formed.

While Jesper continued his flight of 3:10, the day's interrupted operations continued at a much lower level, with nobody else posting flight times of >30 minutes.  Roger Burhall, flying the Discus, came closest with 24 minutes, while Ron Beezer and Christina Griffin had 22 minutes in K21 KLW.  Flying came to a halt around 1545 hrs as the cloud closed in, with the day's instructors joining their compatriots in the briefing room for an instructors meeting.  John Carter described the soon-to-be-introduced training card and programme for new members, covering ground based activities, Paul Whitehead provided 'church notice' information and Steve Wilson provided information on the S80 flight computers and Becker 6201 radios soon to be fitted to all the club gliders.   The instructors then joined the rest of the club members, some enjoying an evening meal courtesy of Liz and helpers, prior to attending a Member's Forum at which Chairman Chris Thirkell reviewed the results of 2016's flying and outlined the Board's priorities and objectives for the coming years.  The Forum concluded with a number of member's questions being discussed.